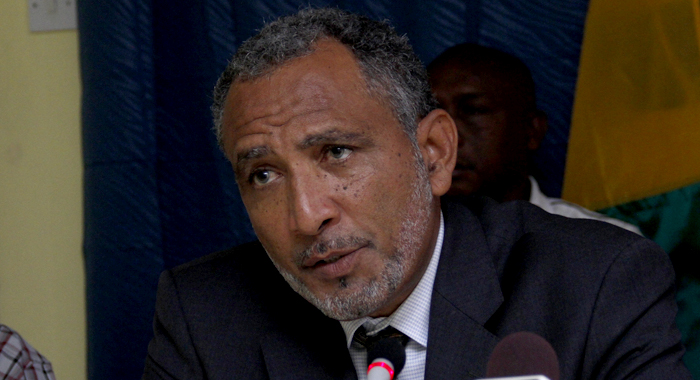 President of the main opposition New Democratic Party (NDP), Godwin Friday, says he disagrees with party founder and former prime minister, Sir James Mitchell that the NDP should abandon its petitions challenging the results of the 2015 general elections.

“… we are fully in support of our two candidates, [Ben] Exeter and [Lauron] Baptiste in the pursuit of the petitions,” Friday told a press conference on Wednesday, one day after Sir James’ comments.

“There is a reason there is a law that allows you to challenge the results of elections. If you don’t use it, then it becomes redundant,” said Friday, a lawyer, who became president of the NDP in November.

The petitions were filed after the December 2015 general elections when Friday, who is Member of Parliament for the Northern Grenadines, was a vice-president of the NDP.

Speaking on Xtreme FM on Tuesday, Sir James, who has had a strained relationship with the NDP since 2010, suggested that the party has little chance of prevailing in the courts.

“In my book, as I have said before and I will say it again: elections are won on election night. Name me the time that elections were won in the court. It doesn’t happen,” said Sir James, who in 2010 said that he does not trust even Jesus Christ with an election until the results are announced,” Sir James said.

Electoral officials say that the Unity Labour Party (ULP) of Prime Minister Ralph Gonsalves won the vote by eight seats to the NDP’s seven — a repeat of the 2010 election results.

The NDP is challenging the results of the vote in Central Leeward and North Windward, but the High Court — without hearing the substantive matter — on April 4, 2016 threw out the petitions as improperly filed.

The Court of Appeal will review that decision in St. Lucia next week and the NDP is hoping that at the end of the legal proceedings, the court would either declare it the winner in those seats or order fresh elections in the two constituencies.

The NDP had hoped that the appeal would have been heard sooner, and Friday said Wednesday that it is “taking so long for it to be resolved, that is a problem.

“These matters should really be expedited and they should be dealt with very quickly. But the process itself, doesn’t negate the fact that when there are real issues to be determined, which we believe are here, that you have to pursue them.”

He further said that challenging the results are also part of the nation’s democratic process.

“… and we believe that there are very, very good grounds on which these matters are going forward. We will have to wait for the Court of Appeal to make its decision and all we are doing is using the process, using the law that is there, to pursue the rights of the people in Central Leeward and North Windward, specifically, but I think it is a matter for the whole country.”

Friday said that the NDP is confident that its case is “strong” and that the court will rule in the NDP’s favour.

“Should the court grant the appeal, the petitions will then be able to proceed to a hearing on their merits before a judge in the High Court. We believe that, based on the law and the evidence in the cases, our candidates, Mr. Exeter and Mr Baptiste. Will win their legal battle.”

“Democracy in St. Vincent and the Grenadines is on trial in this case. Therefore, it is vitally important that it is pursued resolutely and be decided by the court without further delay. It has been a long and frustrating battle for justice but we will see it through to the end and by the grace of God, Mr. Exeter and Mr. Baptiste will prevail and we will have fresh elections in this country.”

Friday, however, said that the NDP has given “considerable thought” to what would happen if they fail at the appeals court.

He said that in such as situation, the party will have to resort to “a political response”.

“But, at this time, we are focusing on winning the appeal and we are advised by our lawyers that the appeal will proceed and that we intend and expect to prevails. So, at this time, I don’t want to prematurely say what is going to happen in a hypothetical situation, but it is an important question, one that we have given considerable thought to,” he said.