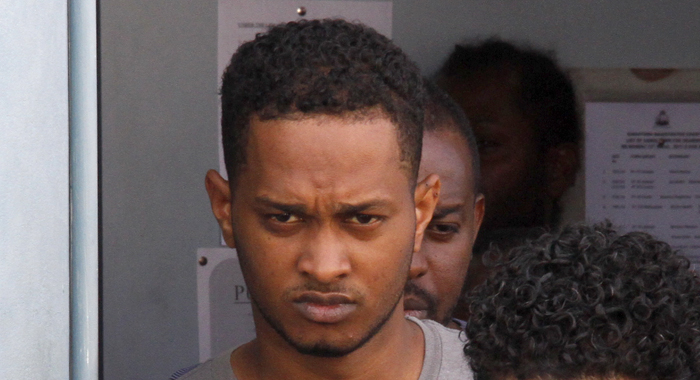 A St. Lucian man appeared at the Kingstown Magistrate’s Court on Wednesday, charged with nine counts of theft as police continue an investigation into an automatic teller machine scam in St. Vincent and the Grenadines.

The crimes were allegedly committed in Kingstown, the nation’s capital, the southeastern town of Calliaqua, and Barrouallie, a fishing town on the west coast, as well as the northern Grenadine island of Bequia.

The Crown is alleging that Harry stole EC$5,500 from Michelle Williams of Owia in four incidents between March 10 and 12. The crimes were allegedly committed in Calliaqua, Kingstown, and Bequia.

Harry is also accused of stealing EC$4,000 from Curvis Lewis of Sion Hill in two incidents in Kingstown on March 10 and 11.

He is also accused of stealing EC$6,000 from Willis Pope of Villa in three incidents in Kingstown, Calliaqua and Bequia on March 10, 11, and 12.

The charges have been laid under Section 209(1) of the Criminal Code.

Prosecutor Shamrock Pierre objected to bail, noting Harry’s nationality, adding that while bail is a right, that right is not absolute.

He further told the court that the charges against the accused are serious and that police are carrying out a series of investigation with which Harry might be able to assist.

Pierre noted that the defendant is a St. Lucian and said that given the porous nature of the Vincentian borders, he is a possible flight risk.

Magistrate Bertie Pompey said that he agrees with the prosecution that the accused is not a suitable candidate for bail.

He remanded the defendant into custody and transferred the matter to the Serious Offences Court for the commencement of a preliminary inquiry on April 20, 2017.

They were remanded into custody as the prosecution said they are persons of interest in another investigation.

Police sources tell iWitness News that they are also persons of interest into the police investigation into the ATM scam.

Sources say that some EC$70,000 was netted by an ATM scam over the past few days.

Police are said to be looking for a fourth St. Lucian as part of their investigations.