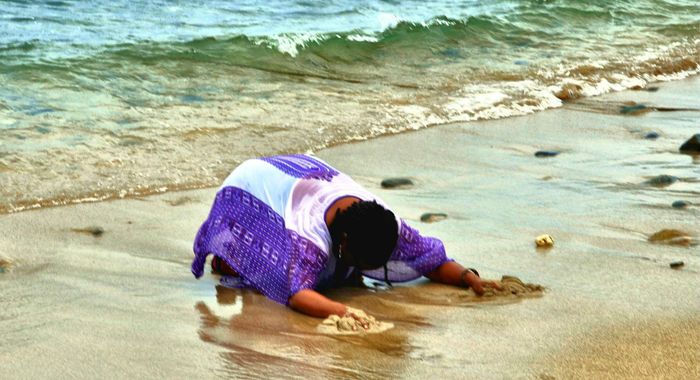 In this undated The Garifuna Heritage Foundation Inc. photo, a Garifuna woman prostrates herself and wails on the sea shore at Balliceaux.

A group dedicated to rebuilding and retrieving the Garifuna Heritage in St. Vincent and the Grenadines (SVG) on Tuesday called for the preservation of Balliceaux, the now uninhabited Grenadine island to which Garifunas were sent before being exiled to Honduras two centuries ago.

The Garifuna Heritage Foundation Inc. (TGHF) made the call at the annual National Heroes Day wreath-laying ceremony at the Obelisk in Dorsetshire Hill.

“We, in the TGHF, continue to support this government and CARICOM’s call for reparations for native genocide,” Christopher Grant, the TGHF’s representative at the event said.

“In addition, because we believe that the death of over 2,000 Garifuna people on Balliceaux was an act of genocide, we call on the government of St. Vincent and the Grenadines to use all efforts to preserve and protect the island of Balliceaux as a sacred heritage site for the use of future generations,” he said.

Grant said the TGHF will continue the public education work to sensitise Vincentians about Garifuna’s unique heritage and significant contribution of the indigenous people to the development of SVG and the world.

“Together, with our partners locally and internationally, all of us must continue to work to harvest the richness of this culture that was born here in St. Vincent and the Grenadines and use it for the advancement of our nation,” he said.

The ceremony takes place annually at the Obelisk erected in honour of the nation’s only national hero, the Right Excellent Joseph Chatoyer, Paramount Chief of the Garifuna people, who died in Dorsetshire Hill on March 14, 1795.

After Chatoyer’s death, the British banished about 5,000 Garifunas to Balliceaux, a tiny Grenadines island, where half of them died before they were exiled to Roatán, Honduras.

Balliceaux, which is privately owned by a Vincentian family, has been fingered for tourism development and is listed for sale on some websites, with asking prices of up to US$30 million.

Some persons have said that in light of the island’s importance in the nation’s history, it should remain as a heritage site.

3 replies on “Garifuna group calls for preservation of Balliceaux”