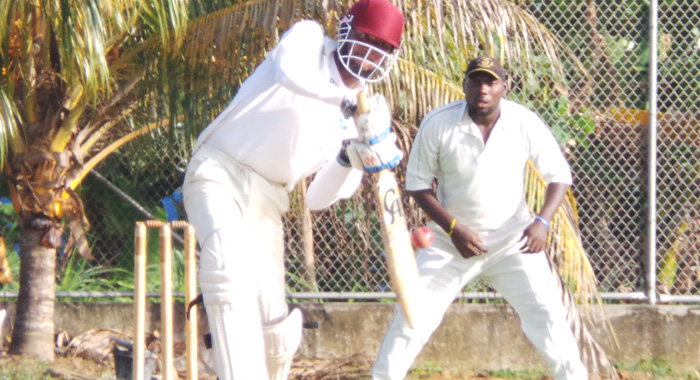 West Indies Under 19 pacer, Obed McCoy, bowled Team Rivals to a comprehensive innings-and-38-runs win over Guardian General Saints at the Sion Hill Playing Field on the weekend as the National Lottery Authorities Premier Division got on the way.

The tall McCoy – who was forced to return home from the West Indies team that won the 2016 ICC Youth World Cup because of a hand injury — took centre stage on Sunday in the Guardian General Saints second innings.

Bowling with impressive pace from the quarry end and aided by a good crosswind, the tall lefthander, who was just picked up by the St. Lucia Stars in the CPL, proved an uncomfortable customer on the day to help dismiss Guardian General Saints for 68 in 19 overs after they faced a deficit of 106 runs.

He began the demolition job by removing opener Rickford Walker LBW (0) then bowled Seon Sweene (0) to send Guardian General Saints into a tailspin from which they never recovered. When just before tea he removed the off stump of Ray Charles off the final ball of the 19th over and his tenth, he had the excellent figures of 7/31 to earn the man of the match award.

“He bowled well and he swung the ball both ways with a lot of pace,” said former Windward Islands batsman Romel Currency, in analysing McCoy’s performance.

Currency batted 71 balls for his 9 runs in the second innings and before edging McCoy on to his stumps.

Earlier, Team Rivals had reached 218/7 before declaring their innings on the back of 71 from opener Asif Hooper and an unbeaten 35 from McCoy.

The prolific duo of Hyron Shallow (23) and Casmond Walters (20) both had modest returns bit the lower order was able to add crucial runs.

Hooper, who recently returned from Barbados, struck 4 while galloping on his luck.

Guardian General Saints, who won the toss and elected to bat, were dismissed for 112 with Currency getting the top score of 58 from 60 balls with 6 fours and 3 sixes. Jerron John got 31, while Walters 3/13, Roneil Jeffrey 2/33, Orlanzo Jackson 2/37 and McCoy 1/25 shared the wickets.

John, who was the only batsman who got into double figures in both innings — with scores of 31 and 14, saw no fault with the Sion Hill square, but attributed the loss to lack of real fight by the batsmen.

“There was nothing wrong with the wicket, on the first day it was a bit up and down but on day two all it needed was real application which we did not show, but Obed really bowled well,” John said.