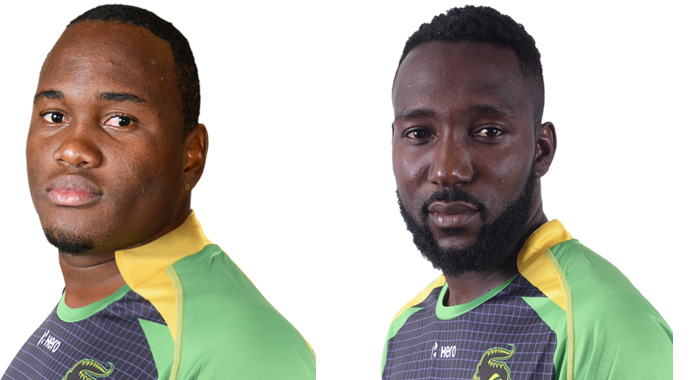 Four Vincentian cricketers have been given an opportunity showcase their talent on the world stage after being offered contracts in the 2017 Hero Caribbean Premier League T20 competition.

The four are batsman, Gidron Pope and fastbowler, Kesrick Williams, who are with the Jamaica Tallawahs and wicketkeeper/batsman, Sunil Ambris and left-arm pacer Obed McCoy with the St. Lucia Stars.

The Vincentians are among the 103 players selected by the six franchises out of the 258 players who had offered themselves in the 2017 draft.

West Indies Under 19 opener Pope is the lead act among the Vincentians after being picked up by the Jamaica outfit in the seventh round of the CPL 2017 Draft for a price tag of US$40,000. Pope, a left-handed pugnacious batsman who also bowls tight offspin, is being seen by the management of the Tallawahs as an ideal replacement for captain Chris Gayle, who has moved to the St. Kitts Patriots.

The signing of Pope by the defending champions, Jamaica Tallawahs, appears to have fulfilled cricket website espncricinfo’s positive and philosophical piece on the Vincentian.

“If the next few years go well for Pope, West Indies can expect a player who can hit the ball cleanly, bowl tight offbreaks, is keen on fairness and modesty, and knows how to support his team-mates,” the website said.

“The simplicity of Pope’s see-ball-hit-ball approach has been noticed in this tournament. Over the next few years, he will possibly have to deal with comparisons with Chris Gayle, T20 contracts, and playing for West Indies,” it added while laying out the possibilities which are opened to him.

The Vincentian made a name for himself in the 2016 ICC Youth World Cup in Bangladesh where he played a pivotal role with both bat and ball in helping the West Indies win their inaugural title at that level.

The left-hander struck 232 runs in six innings at an impressive strike rate of 107.90 and an accepted average and 38.66. He also picked up crucial wickets, took important catches, and featured in runouts, which saw him gaining selection to the World Team selected at the end of the tournament.

Pope on his return home, despite being given a VIP welcome, was quickly relegated to the also-rans. While his teammates in other countries whose contributions were far less than his received monetary rewards, the Mount Grennan-born Pope has taken up station next to “Brother Ebony”—“ain’t get nothing at all”.

His treatment at the hands of Darren Sammy and the St. Lucia Zouks in the two matches in which he was selected to play — not getting a bat in the first and going in at number eight in the second innings where he faced one ball — was viewed as scandalous by fans here and abroad.

This even after he had hammered the USA bowling attack 24 hours earlier, finishing with 7 sixes in his 62 off 27 balls as a CPL Invitational XI defeated a USA XI by 7 wickets with 2 balls to spare.

His tenure in the dumps was extended further when after being selected by the Rangpur Riders to play in the Bangladesh Premier League he suffered a broken arm in a vehicular accident and could not take up the contract said to be worth US$30,000 at the time.

Now, fully recovered from that injury and showing good form, Pope is ready to subject the CPL bowlers to a baptism of fire.

“I intend to play my natural game and that is to be attacking. Sometimes I may get away and other times it may not come off but that is cricket,” Pope said, a glint in his eyes and a mirthless grin lingering at the corner of his mouth.

His natural game brought him two boundary-laden centuries in the just concluded NLA Neil Williams T20 tournament playing for FLOW Radcliffe. It also saw him being dismissed cheaply inside the first two overs on at least three occasions, underlining his point.

Indications are that the officials and backers of the Tallawahs are expecting the 20-year-old Pope to shoulder the responsibility in the absence of the departed Gayle and the suspended mercurial allrounder, Andre Russel.

One local cricket official feels that what he terms as “the disrespect” shown by Sammy and the St. Lucia Zouks can well be the “obstacle turn stepping stone” to aide Pope’s progress.

Williams, a cheap pick up at US$5,000 in the 13th round of the Draft by Tallawahs last year, was among the leading bowlers with 17 wickets to finish third overall behind only Sohail Tanvir and Dwayne Bravo.

He was later called into the West Indies T20 squad for the three-match series against Pakistan in September in Dubai as a replacement for allrounder Andre Russell. He bowled impressively on his T20I debut, finishing with figures of 4-0-15-2.

The 27-year-old Williams, who bowls with cobra-like pace and has developed a well disguised “slower ball”, was also drafted by the Rajshahi Kings in the Bangladesh Premier League, where he collected 8 wickets in helping them to the final, which they lost.

This time around, Williams was bought by the Tallawahs for US$30,000 and is expected to take on an even more important role with Russell not in the mix. There are suggestions that with two of the franchise’s brand players in Gayle and Russel not being in the mix this year that Williams could be elevated to that role earning him an additional amount in excess of US$10,000.

While many expected him to have made his advent into the Indian Premier League (IPL) following those good performances but that was not the case, as he did not find favour with any of the eight Franchises.

“I am more surprise than disappointed,” Williams said at the time.

Williams represented the Windward Islands in the recent West Indies Super50 but did not perform as was expected.

It is being suggested in some quarters that the player focus on the shortest version of the game, something that the Team Rivals player admitted that he is giving serious thoughts.

One reply on “Four Vincies in 2017 Hero Caribbean Premier League”