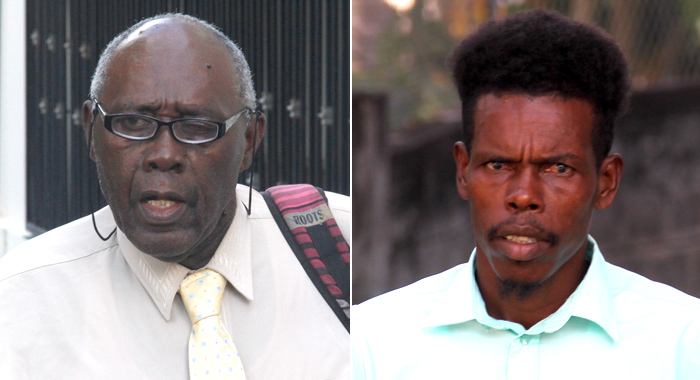 The defence says that the crown has not made out a case against Ehud Myers, left, and Davanan Nanton. (iWN photos)

The preliminary inquiry into the death of the seven students at Rock Gutter two years ago ended in Kingstown on Wednesday with Chief Magistrate Rechanne Browne-Matthias reserving until next week Friday, March 31, her decision on no case submissions by the two defence lawyers in the case.

Ehud Myers, a 67-year-old pastor, and Davanan Nanton, a 36-year-old chauffeur, have each been charged with seven counts of involuntary manslaughter in connection with the students’ deaths.

They are charged that by omission they caused the deaths of Racquel Ashton, Chanstacia Stay, Glenroy Michael, Jamall and Jamalie Edwards, Simonique Ballantyne and Anique Alexander.

Portraits of six of the seven students who died at Rock Gutter on Jan. 12, 2015 on display at the memorial service in Fancy one year later. (IWN photo)The students died on Jan. 12, 2015 when the omnibus in which they were travelling to school careen down a steep section of the road and went into the sea, apparently as a result of brake failure.

Nanton was the driver of the vehicle and Myers was the conductor.

The bodies of Ballantyne and Stay were never recovered from the ocean.

The investigator, Station Sergeant of Police Junior Nero and auto mechanic McKenley Roberts were the final witnesses called at the Serious Offences Court in Kingstown on Wednesday.

After the court heard their evidence, counsel Grant Connell, who is representing Myers, told the court that the crown had produced “no inkling of evidence” to substantiate the charge against his client.

The lawyer said he had listened to the evidence of all the witnesses, including Nero, but, held at its highest, the evidence bares no nexus to the charge.

“It is interesting to note that today, at this juncture, the court has absolutely no evidence as to the omission by Myers that caused the death of these seven children,” Connell said.

The defence counsel said that much was made about the mechanics of the vehicle. He, however, said it is interesting to note that from Nero’s evidence he did not check the inspection records of the vehicle as part of his investigation.

He further said that a second inspection must be done in December in order to make the vehicle roadworthy for the following year.

The lawyer said that if the machinery is in place to ensure the safety of the travelling public and pedestrians, HL636, would have had to be inspected in December of 2014, but noted that Nero’s evidence did not guide the court in that regard.

The court on Wednesday heard the evidence of the investigator, Station Sergeant of Police Junior Nero. (iWN Photo)He said such an inspection would have answered the question of whether the brake or any other mechanical part was in place to make the vehicle road worthy.

“The evidence of the other witnesses, with greatest respect to them, is not worth referring to. I reiterate that there is absolutely no evidence at this juncture that will make out a prima facie case.”

Connell said that looking at the evidence, on the day in question, Myers did everything that he had done every day before travelling in the van.

“He stopped and prayed to the Almighty. If praying to the Almighty for a safe journey is an offence that landed him here, we are lost as a people,” Connell said and asked the magistrate to dismiss the matter.

“No court decision, be it your court, the High Court, the Appeal Court, the Privy Council can heal the wounds caused by the incident at Rock Gutter. Only time; only time,” Connell said.

He said the evidence of the other witnesses was “most crucial because it was very painful”.

“In my … almost five years of practice, this is the second case that I did that brought tears to my years,” he said, adding that he is not comfortable doing the submission, reflecting on the horrific tragedy.

He pointed out that Nero had admitted that knowing of the likelihood of criminal proceeding resulting from the investigation, he questioned Nanton twice, without cautioning him.

Bruce pointed out that while the Police and Criminal Evidence Act (PACE) has been repealed in St. Vincent and the Grenadines, the police code required that Nero caution Nanton.

Defence counsel, Israel Bruce leaves the Serious Offences Court on Wednesday. (iWN photo)The counsel further said the most potent evidence from Nero was in response to a series of questions about the responsible manner in which Nanton conducted himself on the day of the tragedy.

“His answers, albeit hesitant, came to the safe landing that Davanan Nanton, having recognised that the vehicle had picked up speed, his entire attention was focused on how do I put this vehicle in safety, minimising the possibility of injury to any other person,” Bruce said.

Bruce said Nanton said he then resolved to try to keep the vehicle on the road and make it around the curve, with the hope that the terrain of the road ahead would have helped to neutralised the speeds and bring the vehicle to safety.

“He did what any responsible driver would have done. To this point, there is not a single witness from the Crown who came to give evidence and indicated what is it that Davanan Nanton ought to have done that the did not do,” Bruce told the court, adding that that is where the principle of omission lies.

Bruce said that maybe, beyond the evidential threshold, the Office of the Director of Public Prosecution must have recognised the public interest in this matter to still have it ventilated in court and satisfy everyone that justice was done.

“It would not be an injustice for this honourable court to find that there is a woeful lack of evidence upon which the charges against Mr. Nanton can stand, and, therefore, the charges ought to fall; each and every one of them.”

Bruce said his client “did not fail to do anything which was required of him”, adding that while Nanton had heard of an incident, it was before he was driving the minibus.

The lawyer said that on the one or two occasions when it appeared to him that something was wrong, Nanton, having some skills in so doing, changed the disk pads on the van.

In his response, prosecutor Adolphus Delplesche noted that Bruce had called for crash barriers to be installed in the northern section of St. Vincent as a show of love.

Delplesche said that a driver and the owner of a vehicle have a duty to show care for their passengers.

The prosecutor said that the accused persons are charged with manslaughter by omission and cited R v Adomako [1994].

In that case, an anaesthetist was in charge of a patient during an eye operation. During the operation an oxygen pipe became disconnected and the patient died. The anaesthetist failed to notice or respond to obvious signs of disconnection. The jury convicted him of gross negligence manslaughter.

Delplesche pointed out that in that case, the House of Lord held that there is a single, simple test for gross negligence: the defendant must have been in breach of a duty of care under the ordinary principle of negligence. The negligence must have caused death and must, in the opinion of the jury, amount to gross negligence — the question, supremely, a question for the jury.

Delplesche argued that in the current case, the question is whether Myers and Nanton breached their duty of care.

He said that when one gets into a vehicle to drive it, one owes every human being on the road as pedestrians, motorists, and passengers a duty of care.

The prosecutor said the evidence of the motor vehicle inspector clearly shows that the disk pads were defective.

“So when Mr. Nanton pressed the brake pedals, he got no answer from the disk pads. Why? It wasn’t good. It was worn. Down to metal, according to Corporal Pope,” Delplesche said.

The prosecutor said it was Myers’ duty, as the pastor of the church to ensure that the vehicle — which was owned by the church — had proper disk pads.

He further asked if it is not the duty of Nanton, as the driver, to make sure that when he gets into the vehicle it is functioning properly.

“A question for the jury,” Delplesche said.

The prosecutor said the case is a very emotion one, adding that he, too, felt it when the students described what happened that morning.

“But I try not to get my emotions into it,” Delplesche said, adding that he focuses on what the law says.

“I also feel it for Mr. Myers and his co-accused. They could have been dead too. But, thanks to the Almighty God that they are not. But the law must take its course and I am not here to persecute,” Delplesche said, adding that based on the Adomako case, the accused should be made to answer to a jury.

The defence counsel, in a sidebar, however, said there is no correlation between the Adomako and Rock Gutter cases.