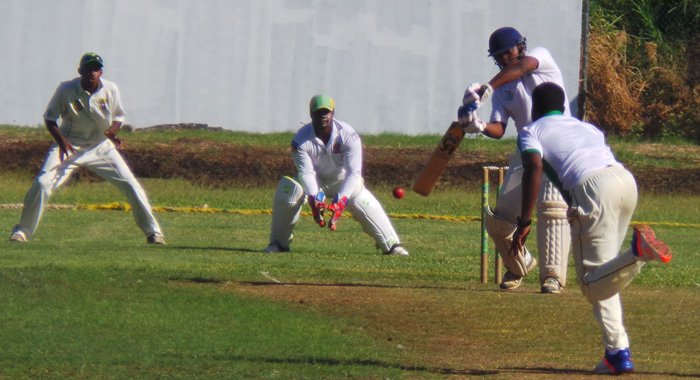 An unfocused Victors 1 were made to pay the ultimate price when they conceded first innings points to Police 2 despite a blistering seven-wicket haul by pacer Ray Jordan in their National Lotteries Authority Premier Division match at the Sion Hill Playing Field on the weekend.

Police 2, with new recruits SVG opener, Desron Maloney and West Indies pacer Kesrick Williams, were asked to take first knock after the start of play had been delayed for 90 minutes. This was as a result of leaky covers, which caused seepage onto the square, though while not in a dangerous area saw umpires Dillon Child and Lenford Goodluck erring on the side of caution.

When play did finally get underway, Victors 1 were offered the opportunity to strike an early blow but Miles Bascombe failed to hold onto an easy chance offered by Maloney off the bowling of Shacquille Browne.

Maloney (15) then added 68 for the first wicket with Danson Andrews in the 9 overs, which were possible before tea. Maloney was dismissed off the final ball in the session when Jordan bowled him.

The lawmen went into the break clearly the happier of the two teams with Andrews 49* and the pugnacious Salvan Browne the next man in.

On the resumption, the fortunes of the teams took a U-turn with Victors 1 claiming 3 wickets including that of Andrews who failed to add to his teatime score, Browne (0) and Andrew Thomas (9) for the addition of 15 runs.

The situation was stabilised through Kevin Abraham (39) and captain Kenneth Denbar (38) who added 60 for the 5th wicket amid close shaves and a couple of fortuitous decisions. The partnership was broken when Denbar was trapped by Nurlon Williams who had reverted to sending down some off-breaks. The Victors 1 team, which had become a frustrated looking bunch by now then committed simple fielding errors, while fretting among themselves and allowing their opponents score crucial runs.

The lawmen went to the close at 174/5 and possibly with the thoughts of their mammoth 549/8 against the same opponents at the same venue 11 years ago. They looked to be moving towards an impressive score when Abraham and his overnight partner, Marcus Thomas had taken their partnership to 92 and the total 235/5, when Jordan took matters into his own hands.

In the space of 3 overs he removed the stumps of Thomas (66), Abraham, Kesrick Williams (1 ball) and Sylvan Spencer (4) and had an ageing Kenroy Martin (1) caught at the wicket. Police 2 lost their last 5 wickets for 15 runs to be all out for 250. The diminutive Thomas, who took the initiative away from Victors 1, took just 46 balls to score his runs and struck nine fours and two sixes.

Jordan finished with the impressive figures of 11.1- 4-50-7, with young pacer Kimson Dalzell taking 2/35. Victors 1 also lost the services of Williams late in the piece with a hamstring injury.

Victors 1 were not off to the happiest of starts as they lost Kirton Lavia (8) caught off the bowling of Williams, with the total on 15. However, this was quickly forgotten as captain Donwell Hector and Atticus Browne (25) added 71 for the second wicket, before the latter went.

Hector was then joined by Chrisroy John (26) and the pair added a breezy 40 before John hit a return catch to a gleeful Martin to make it 126/2.

Victors 1 then took aim and with unnerving accuracy shot themselves in the ankle with what can be described as two needless runouts attempting second runs.

Bascombe on 12 went for a second leg-bye from a ball down to fine-leg and failed to beat the return to see the score 150/3. And Hector who looked in good form was also found short of his ground from a throw from long-off as he ran through for a second run-163/4.

He struck 6 fours and 2 sixes in his 70-ball stay at the crease.

The departure of the Victors 1 captain, appeared to knock the stuffing out of the team and they meekly surrendered for 220 with Williams taking three of the last four wickets to fall to finish with 4/74 and Denbar 2/55.