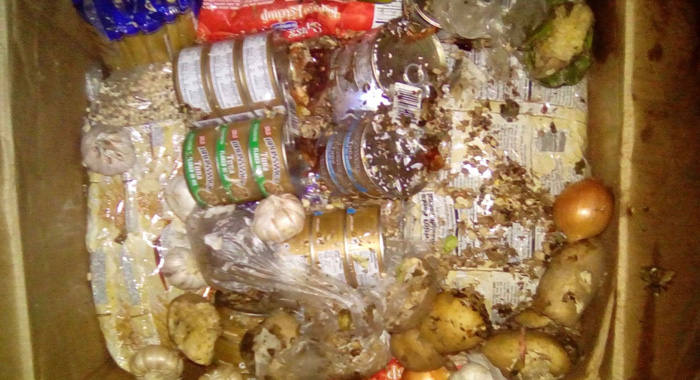 The woman was forced to toss away the box of imported food items because rats had eaten them.

A Canouan woman says she wants to know who will compensate her for a box of food items imported from Trinidad that she had to throw because rats bit them.

Ann-Marie Richardson told iWitness News on Thursday that the condition of the food items when she received them on Tuesday suggests that the rat invasion took place while the items were stored over the weekend at the Customs Department in Kingstown.

She said the food items were packed in a cardboard box and shipped from Trinidad last week Thursday, March 16, arriving in Kingstown one day later.

She said when her boyfriend went to collect the items on Tuesday, some vegetable inside had begun to rot and the Customs officials discarded those.

Richardson said her boyfriend was in a hurry to catch the ferry to the southern Grenadines island and did not inspect the two boxes that he collected, one of which contained mostly laundry items.

She said that when she collected the packages in Canouan, she realised rats had eaten many of the food items.

Richardson said she contacted the Customs Department and a staff member there told her that they have an issue with rats that the Ministry of Health is yet to address.

She said the Customs employees told her to burn the box and its contents and not to consume any of the items, even if they did not show any sign of having been eaten by rats.

Richardson said she had sent US$300 to her mother to buy items for her and was yet to calculate the value of the loss.

iWitness News contacted the Customs Department Thursday afternoon, but a staff member in the relevant department said he had not heard about the development.

“That is like fresh news to me,” he further commented and referred us to his supervisor.

The supervisor, however, said that those matters are to be addressed to the Comptroller of Customs & Excise, who was not in office on Thursday.