Audience plugs in as musical virtuosos play at free concert 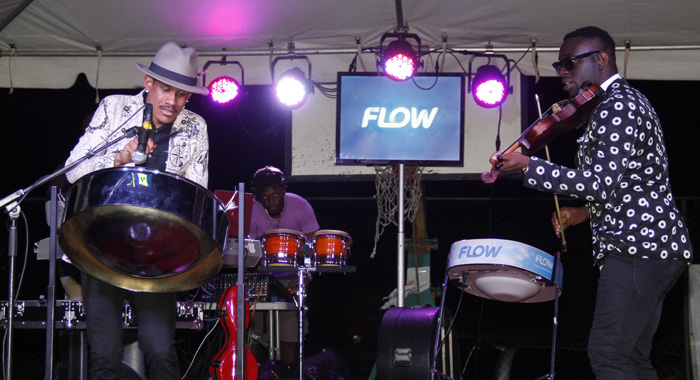 Vincentians were treated to a night of musical bliss as two of the nation’s best-known musicians performed in a live, free concert at the Calliaqua Hard Court on Saturday.

It was a night of strings and steel as violinist, Darron Andrews and pannist, Rodney Small each performed for about 45 minutes during the event, rendering one song together.

The event, which iWitness News broadcast live on Facebook, was organised by Plug & Play, an entity involving member of Parliament for East St. George, Camillo Gonsalves.

In his brief remarks to the gathering, Gonsalves said he believes that the nation has to do much more for live music in St. Vincent and the Grenadines.

He told the gathering that with a new airport and a new appreciation for tourism, SVG has to understand that “live musicians are back again and we have to appreciate and value and encourage young people who put in the time and the energy and the hard work into playing and learning and perfecting their instruments and their craft”.

Gonsalves thanked Andrews and Small for “the magnificent musicians that they have both become.

“I also believe very much in the power of music to bring people together, to make people forget certain petty things,” he said, adding that a lot of Vincentians are caught up in “a lot of petty things and we argue about things that separate us instead of focusing on the things that unite us”.

He said music is one of the things that unite, adding that Saturday’s was not the first Plug & Play event.

“… we want to grow this, we want to have this on a monthly basis to bring people together from all across St. Vincent and the Grenadines to play some music, to have a good vibe, to bring your family and to enjoy yourself.”

He noted that the concert was free, adding, “We are trying to build togetherness and community.”

Gonsalves pointed out that the artistes were also not charging for their services and that the stage, screen and everything else were also done for free.

“So we couldn’t come now and charge you a dollar to come and enjoy yourself tonight.”

Gonsalves later told iWitness News that last carnival, some artistes told him that once Carnival ends that is pretty much the end of their performing time until the next carnival.

“I thought that was really sad, because we have a lot of talent in the country and I’ve noticed that in other countries in the region, talented artistes stay busy, they get a lot of work.”

Gonsalves told iWitness News that the artistes pointed out to him that he has been involved in some of the benefit concerts, both in terms of flood relief in SVG and Dominica.

They further said he seems to be somebody who appreciates music and said there was a need to revive the live music scene in SVG, Gonsalves said.

That conversation led to the birth of Plug & Play. The persons involved decided to do something small and regular to ensure that live music has an audience, a venue and is appreciated in SVG.

There was a soft but excellent launch a few months ago with the bands, Impact and Silk, Gonsalves told iWitness News.

“In that soft launch, we learnt some lessons in promotion and staging and it took us a while to learn from them, but we have done that. So this is the first one of what we hope will be, roughly, a monthly event,” he said.

He, however, noted that because the artistes are donating their time, Plug & Play will have to be arranged around their schedule, but said organisers will try to stage an event every four to six weeks.

iWitness News noted that while with two of the nation’s top musicians in one of the first major shows, organisers might have set a standard that might be a challenge to maintain.

“We started to start the thing with names that everybody knows, which would help the brand and people would understand that the music is quality and it is also a good vibe and we hope that some people will come, even though they don’t know the names of the artistes, they will come because they appreciate the vibe, because they appreciate what we are offering.

“Rodney and Darron are extremely talented and well-known, but we think that St. Vincent and the Grenadines has a far richer vein of music than people really appreciate and we hope that Plug and Play will bring that to the fore,” Gonsalves said.

A criticism of the renditions on Saturday might be the number of local songs in the offering. There were only one or two local songs, including a live rendition by soca artiste, Hance John.