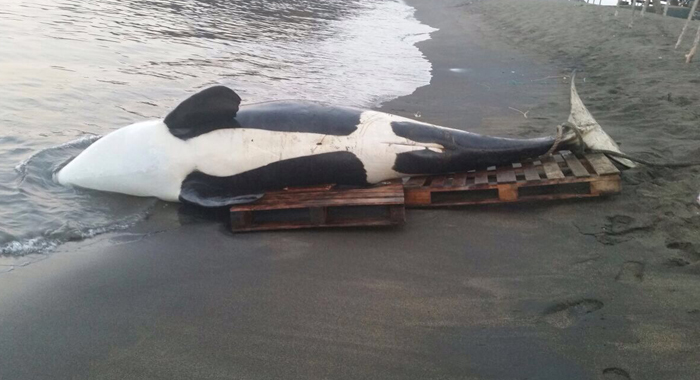 A cruise ship has cancelled all its whale and dolphin watching tours during its calls to St. Vincent after a killer whale, the world’s largest dolphin, was killed in front of some of its guests off the leeward coast last week.

The killer whale, commonly called orca, was among a pod of four that was being observed by some 40 guests from TUI Discovery, which called at Port Kingstown last week.

Ken Isaacs of Fantasea Tours told iWitness News that he was a crew member on board one of two tour boats on a whale and dolphin watch excursion when they spotted a cetacean.

He said he initially thought that the marine mammal was a pilot whale, many of which are often seen off the leeward coast of St. Vincent.

Isaacs, who is the SVG Hotel and Tourism Association “Island Ambassador of the Year 2016”  said that on closer examination of the animal’s back and dorsal fin, he realised that it was an orca.

In all, the group saw four orcas, and information from Barrouallie suggests that two orcas were killed that day, including the one that the tourists witnessed being harpooned.

Isaacs told iWitness News that, on seeing the killer whales, he and the guests were very excited, noting that orcas are very seldom seen in Vincentian waters.

He said that while they were observing the killer whale the second tour boat arrived, followed shortly after by a whaling boat.

The whaling boat, a pirogue with a modified shotgun with a harpoon mounted on the bow, had some three fishermen inside.

Isaacs said that he realised that the fishermen would attempt to kill the orca, so he shouted to them to leave the dolphins alone.

He said one of the men made the hand gesture that means “go to hell”.

Isaac told iWitness News that realising that the fishermen would, in fact, attempt to kill the whale and not wanting the guests to witness the slaughter, he told the captain of the tour boat to go over to where a larger killer whale was.

He said that as they turned away, there was a loud explosion as the spear was fired into the killer whale, to which the whalers quickly attached a buoy, supposedly to prevent it from sinking.

Isaacs said that the guests were disturbed by the development and many of them were still crying as they arrived in Kingstown.

He said it was the second time he was having such an experience, having witnessed some persons in speedboats trying to harpoon humpback whales off Ottley Hall about three years ago.

Isaacs said he understands that whaling is allowed in St. Vincent and the Grenadines because of a tradition introduced by the Scottish.

He, however, said he sees nothing traditional about persons in speedboats using spear guns powered by gunpowder to kill whales.

He said that a lot of places where whaling used to take place have since banned the practice and they are surviving.

The tour operator further called on the government to ban whaling and channel whalers into whale watching.

Whalers in Barrouallie generally hunt for pilot whales — which Isaacs says are abundant in the nation’s waters — but will also take killer whales if they come upon them.

The pilot whale is widely consumed across St. Vincent and the Grenadines and is commonly called “black fish”.

The International Union for Conservation of Nature (IUCN) Threatened Species programme says that the killer whale is the most cosmopolitan of all cetaceans and may be the second-most widely-ranging mammal species on the planet, after humans.

Killer whales can be seen in virtually any marine region, from the equator to polar waters, and, their native countries include St. Vincent and the Grenadines, the IUCN says.

Correction: The incident with the humpback whales occurred three years ago and not three weeks ago, as said in an earlier version of this story.