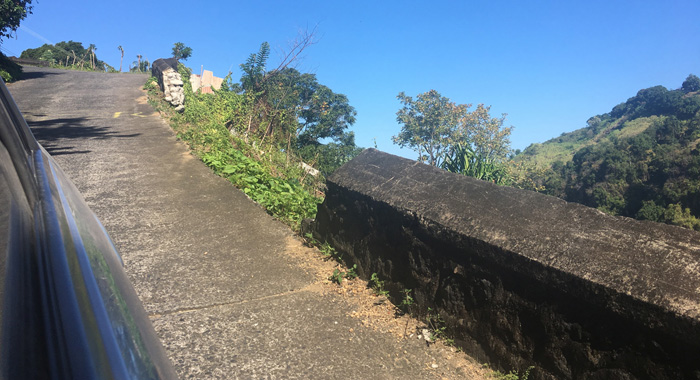 The section of the road in Coulls Hill in April 2017. (iWN photo)

The damaged road at Coulls Hill that has claimed four lives in two accidents since 2013 will get a temporary fix sometime soon.

Minister of Transport and Works, Sen. Julian Francis, gave the update in Parliament on Thursday while responding to a question from Member of Parliament for North Leeward, Roland “Patel” Matthews.

Matthews, and opposition lawmakers, told Parliament that the retaining wall at Coulls Hill damaged in 2013 continues to be a cause for major concern to the travelling public.

“Recently the skilful driving of the school bus driver averted what could have been a major catastrophe,” he said.

Matthews asked the minister to give an update of the study that he said is being undertaken to determine the next course of action as it relates to this wall.

Francis told Parliament that the Chief Engineer had told him that he got the design on March 28.

The study suggests that the bridge at the bottom of the valley — between Coulls Hill and Troumaca — be realigned and two of the sections be completely realigned.

Francis said this will mean a lot of excavation, adding that the study also suggests that the road be widened to accommodate, at a later stage, containerised traffic.

“So that they are going all the way at one study.”

He said the study suggests that retaining walls be built all the way down on the bottom end of each section of the road.

“I told him (Chief Engineer) fine, I appreciate that. And it is envisaged to be done under one of the projects we have. The timing, I can’t give you but I said to him we can’t keep the open hole, the gaping landslide that we have there and I have asked him to work with BRAGSA in the very near future to put up some temporary form of retaining [barrier],” the works minister said.

He said it might be like the type of crash barrier being erected at Gibson Corner, adding that the ministry will be working on something temporarily “until we can get further into this larger project.

“And I would want to say to you today that within a very short space of time, we would have a temporary, warning, fix to the situation there.”

Francis said that if a truck hits on the wall “it will go still.

“But I believe that what you want is more a warning and retention for pedestrians, light vehicles and that sort of thing. So, we will work on that in the soonest possible time,” he told Parliament.

Three members of a Spring Village family died in June 2015 when a car plunged over the damaged section of the road.

That accident occurred one year after a Vincentian who was visiting from overseas died when the vehicle in which she was travelling plunged over the same cliff.