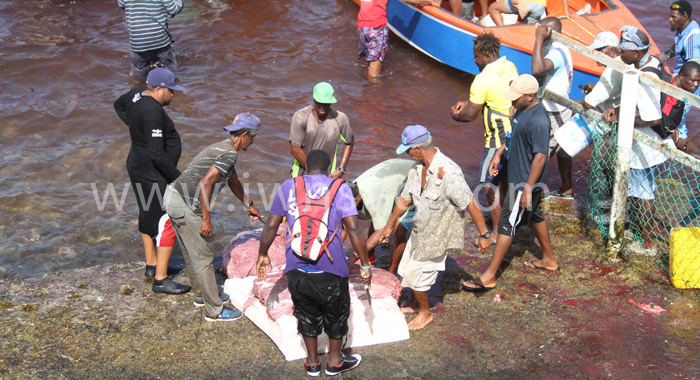 Whaling has been a part of Bequia’s culture for almost 150 years. (iWN photo)

I am a tourist from the U.K. who supports the local whaling tradition and wanted to offer some insight. When you travel in a way respectful and open to other people’s culture, you are not as quick to judge them. You learn things and your perspective shifts from what you know, to understand what they know. One of the biggest shifts for me in my time here is my thoughts on whaling.

I love whales. I think they are beautiful and intelligent creatures. When I first came to Bequia, I didn’t want to judge, but I was alarmed and apprehensive to hear about whaling. But then I saw the men who catch the whales off a 20-foot foot boat with a hand-held harpoon, hand sailing for months sometimes to find none at all. I saw the children who honour the whales and learn about the ways that they live and migrate from their grandparents. I saw with the women who cook the whale for days and preserve in traditional ways that use no electricity. I saw the community that uses every single part of that whale from oil to bone, as an ode to their ancestors. Their ancestors, most of whom were decedents of African slaves, brought from their “indigenous” home to barely survive and ultimately to start a new culture. Whaling was and is an integral part of that culture.

I see the joy, I see the resilience, I see the community come together when a whale is caught and shared between thousands of men, women and children. Do we as foreigners honour the meat we eat in this way?

Who are outsiders to tell these people how they should live? What they should eat? How they should honour their heritage and their people that slaved to make a life for them in these islands? NO, we shouldn’t.

I believe cultural preservation works synonymously with environmental preservation. The way in which the local people live off the land and sea has such a low carbon footprint on the planet and, therefore, on is creatures. They catch only what they can use, they catch it in traditional ways that don’t pollute the ocean with excessive oil or machinery; they need no plastic packaging or electric stoves to eat their food. I think foreigners could learn a lot from the subsistence way of living and fishing.

The locals know the patterns of the sky and sea and earth and the creatures that walk and swim through it. They, like the native people all over the world, understand how humans can live with nature in a way that doesn’t wipe out its resources, something that the Western world has failed miserably at. They, in just existing close to a subsistence way of eating, preserve the land from overdevelopment, preserve the sea from overfishing, preserve the earth from excess waste in food production and exportation. In the eight years I have been vacationing in Bequia, two whales have been caught on the island. These locals have no desire, legal ability or means to over-whale like other countries.

Coming to someone’s country and trying to change the laws they eat by is absurd just because you find it awful to look at. Can you imagine if Vincentians went to the to your country and saw the way that cows and chickens are factory-farmed for mass consumption? Most meat you eat in the UK or USA is grown and slaughtered in excess in awful and inhumane ways, not to mention probably most of the meat that is served on cruise ships that come to St. Vincent and Bequia. If you want to judge the local people of these islands for the methods that allow them to live off the land and sea, then let’s open the conversation up to the carbon footprint and marine damage of the cruise ships waste. Let’s think about the proof overdevelopment of the small island for the few rich outsiders. Let’s think about the meat we eat from the store where we are from, boneless and stripped of any resemblance to the animal that was killed–does that make us feel that we are not actually killing an animal? I think we are too quick to judge a traditional and subsistence practice when we drive cars that pollute the air and generate so much waste that pollutes the sea these local people live off of. Maybe we should look at ourselves, and the ways that we survive and see if we should be so quick to judge.

I would argue as a tourist, that Bequia is so special because of its unique traditions and attracts many tourists like myself because of that reason. I respect Bequia and its people enough to know they will choose when and if the time has come to stop whaling. Until then, we are visitors and should honour the way people here live.