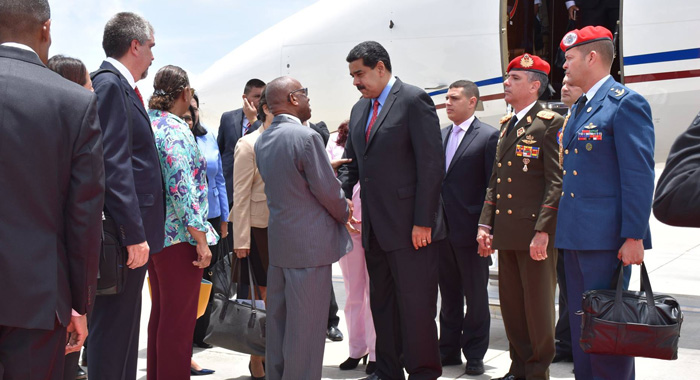 President of Venezuela, Nicolas Maduro, arrived in St. Vincent and the Grenadines on Wednesday afternoon for an unannounced visit on which the host government is yet to comment.

Maduro was treated to a red carpet welcome when he landed at the Argyle International Airport, which was built with support from the South American nation.

Maduro’s visit comes less than two months after a visit announced for the Feb. 14 opening of the airport did not materialise amidst political tensions in Caracas.

Word of Maduro’s visit emerged on social media and SVG Airport posted on Facebook, photos of the formalities to welcome the visiting leader.

Kingstown and Caracas have maintained warm and deepened ties under the Ralph Gonsalves administration and Kingstown is one of the Caribbean Community capitals that have benefited from Venezuela’s PetroCaribe.

Under PetroCaribe, participating nations can import fuel from Venezuela under preferential payment arrangements. Participating nations say the initiative has been an important social buffer amidst harsher economic realities after the global financial crisis of 2008.

Information reaching iWitness News said that the South American leader will meet with delegates of the 64th meeting of the Organisation of Eastern Caribbean States (OECS) Authority, taking place in Kingstown.

The meeting is taking place under the chairmanship of Prime Minister of St. Kitts and Nevis, Timothy Harris.

The OECS is dedicated to economic harmonisation and integration, protection of human and legal rights, and the encouragement of good governance among independent and non-independent countries in the eastern Caribbean.

The OECS came into being on June 18, 1981, when seven Eastern Caribbean countries signed a treaty agreeing to cooperate with each other while promoting unity and solidarity among its members.

The Treaty became known as the Treaty of Basseterre, so named in honour of the capital city of St. Kitts and Nevis where it was signed.