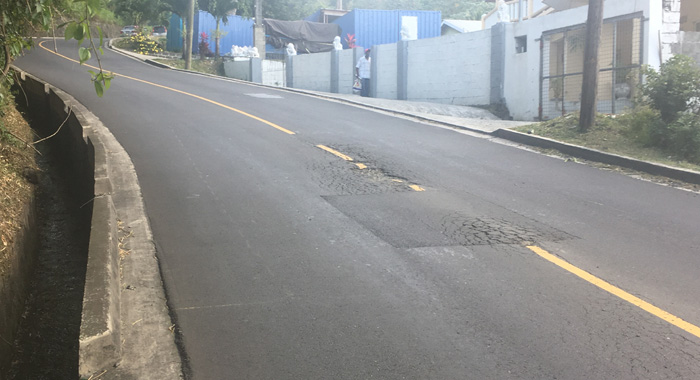 Some of the temporary patchwork has already begun to fail. (iWN photo)

The weak areas in the rehabilitated South Leeward Highway will be repaired soon, Minister of Works, Sen. Julian Francis has told Parliament.

He said there are some weak areas in the stretch of road from Gibson Corner to Randy’s Bakery — near Milton Cato Memorial Hospital.

Francis said some temporary patching has been done and the permanent repairs will be done as soon as the contractors complete the Layou section of the project.

Also, water went under the freshly laid asphalt last year in the area from Cyrus Street to Daddy’s Shop and that section of the roadway will be dug up and done over, Francis said.

The extended contract for the South Leeward Highway expired on April 7, almost one year after the initial deadline.

“And I am sure they will be negotiating for maybe another month or six weeks for the main contract works to be done, and then, the variations would then be timed and additional time given for those to be done,” Francis told Parliament.

He said the government is considering rehabilitating an additional kilometre of road in Layou under the project, which is being financed by the Caribbean Development Bank.

2 replies on “Weak areas in new S. Leeward Highway to be repaired soon”