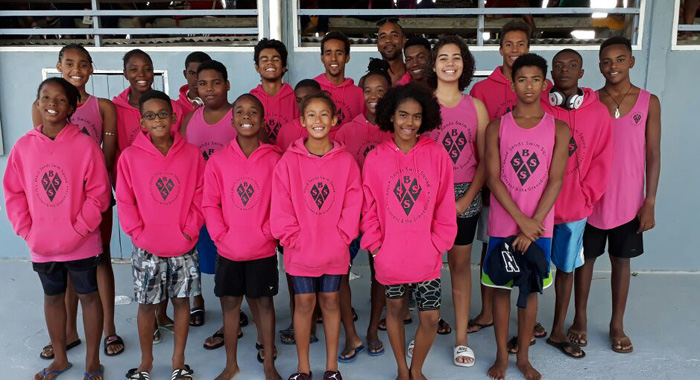 This highly competitive swim meet hosted 27 clubs from across the region and as far as New York City and had more than 300 swimmers taking part.

Caitlin Polious and Jamie Joachim lead the way in the girls 9-10 years old age category with Polious bringing home a total of five gold and 2 silver medals whilst also swimming herself to 2nd place overall in her age category.

Joachim was unable to medal but came home having swum some outstanding personal best times.

In the boys 9-10 years age group, youngsters Eltontè Leonard and Jayson Sandy showed their swimming dominance with Leonard winning two gold and five silver medals and placed second overall in the age category and Sandy brought home three gold and three bronze medals and clinched the third spot overall. Sandy also left his mark on the competition by breaking three meet records in the 50, 100 and 200 meter breaststroke. Both boys also achieved times that already qualify them for CARIFTA 2018.

Paige Cadogan, Akayla Chrichton and Bryson George competed in the girls and boys 11-12 years age group. Cadogan brought home one gold, 2 silvers and 3 bronze medals and hot on her heels was Chrichton who, unfortunately, didn’t medal but improved her best times in nearly every race. Bryson George swam strong in the boys’ category winning 1 gold 2 silver and 4 bronze medals.

Black Sands had five boys battling it out in the 13-14 age group. New to competitive swimming were Adriel Bullock and Anwar Medjahed, both swimming well and setting themselves good time standards to beat in the future. Tyrese Lewis and Tyrique (Dre) Thomas also swam themselves to personal best time in most of their races over the four days. St Vincent’s Alexander Joachim challenged the best in his age group and swam himself to 2 gold, 5 silver and 3 bronze medals and concluded the competition with second spot in the overall age group. Ria Adams was the only girl swimming for Black Sands in the girls 13-14 years age group. Adams swam strong and managed to get one podium spot, proudly bringing home a bronze medal.

In the girls 15 years and over, Nyah Isaacs and Mornnell Ollivierre represented Black Sands. Isaacs swam herself to a podium spot, winning a bronze medal in the 50 meter Backstroke and racing for the first time, Ollivierre showed her potential and recorded some good times.

Medals were also won in the relay events with Black Sands relay swimmers bringing home one gold two silver and one bronze medal .

At the close of the event, Black sands Swim Squad won the third place trophy in the overall best club category.

Club founder and head coach Kyle Dougan said: “The results of this competition are fantastic. All 21 swimmers represented their club well both in and out of the water, showing the region that St Vincent’s competitive swimming standard is now at a very high standard.”