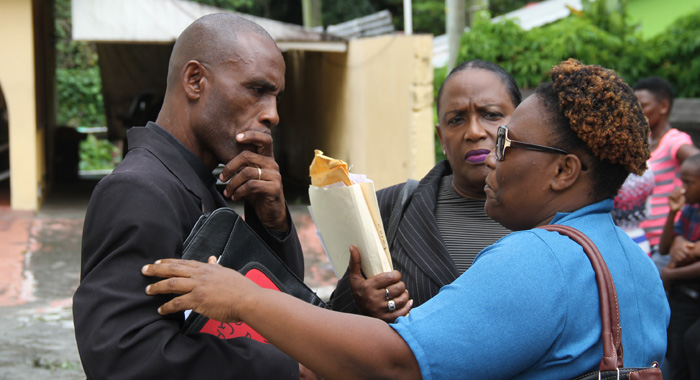 Lawyer Kay Bacchus-Baptiste, centre, looks on as her client, Pastor Nigel Morgan, speaks with a woman outside the Mesopotamia Magistrate’s court on Friday. (iWN photo)

The defence counsel in the case in which a pastor and his family are charged with injuring a man by pouring hot water on him, has suggested that they wanted to bless the virtual complainant.

Pastor Nigel Morgan, his wife, Althia Morgan, and their daughter, Krystal Morgan, of Hopewell, Mesopotamia are each being tried on one count of causing grievous bodily harm to Cuthbert “Mafia” Victory, a resident of Caruth, Mesopotamia.

The crown is alleging that the Morgans harmed Victory by pouring hot water on him on April 9, 2016.

But during her cross examination of the “star witness”, Clint “Mr. Blue” Antoine” at the Mesopotamia Magistrate’s Court on Friday, defence counsel, Kay Bacchus-Baptiste, attempted to portray Victory as “a bad egg”, who would repeatedly harass the Morgans whenever he visited Antoine — Victory’s friend and the Morgans’ neighbour.

Antoine, who only came to our attention after a compelling summons was issued for him after he failed to turn up twice, however, rejected this portrayal, saying that “Mafia” was just a nickname.

During cross-examination, Antoine told the court that he knows Mr. Morgan to be a good community man and a pastor.

He had earlier told the court that Mr. Morgan had cussed at Victory, telling him that he could not read or write, adding that Victory had retorted that Morgan should study his family instead.

However, when Bacchus-Baptiste put it to Antoine that he had left out the worst of the things that Victory had told Mr. Morgan, he said that Victory did not use any language that was “out of the way”.

Antoine, when pressed, told the court that Victory had told Morgan that he was a “buller man” — a culturally vulgar and offensive word for a gay man.

Antoine, however, denied that Victory had told Mr. Morgan that he (Mr. Morgan) wanted to have sexual relations with him (Victory).

The star witness, pressed by the defence counsel, admitted that Victory had also told Mr. Morgan that he (Mr. Morgan) wants his daughters for himself.

Antoine said he understood this to mean that Mr. Morgan wanted to have sex with his own daughters.

The witness said that Victory was not smoking marijuana at his place, but said he (Victory) was playing on his duke box a song, “Tell me if you like it”, by Vybz Kartel.

Antoine suggested that Bacchus-Baptiste had confused the words of that song, with another, whose sexually explicit lyrics she alluded to in court.

In his evidence in chief, Antoine had told the court that Mr. Morgan has left his (Mr. Morgan’s) house and came over to Antoine’s.

He said that the cleric had poured something from a “tube bottle” on his hand and touched Victory on the forehead, while pleading “the blood of Jesus”.

He said that Victory swung his hand and then a scuffle ensued. Mr. and Mrs. Morgan held Victory in a drain while their daughter, Krystal, poured what was said to be a hot liquid from a kettle onto him, before Mrs. Morgan slammed his head into a wall, the witness told the court.

The lawyer put it to the witness that Victory was displeased that Mr. Morgan had appealed to him to stop playing the vulgar music while children were around.

But Antoine said that no children were around during the initial exchange and that they only came out after the fighting began.

The witness told the court, as the defence lawyer said, that it was true that Victory had told Mrs. Morgan that she had given up her dignity when she married her husband and that she was dumb to marry him.

Regarding the Morgans’ attempts to “plea the blood of Jesus” on Victory, Antoine told the court: “I know when you go church that is what they do in church.”

Earlier, Antoine had told the court that during the exchange between her husband and Victory, Mrs. Morgan had told Victory to leave her out.

Bacchus-Baptiste said that it was when Victory began berating Mrs. Morgan that she told him to leave her out of the skirmish.

“Mafia didn’t want to be blessed so he swung at Mrs. Morgan and slapped her,” Bacchus-Baptise said.

“The water was baptism then,” one person in the audience in court commented and began giggling.

Antoine, however, said that while Victory had swung his hand when Mr. Morgan attempted to place it on his forehead, Victory did not slap Mrs. Morgan, who was standing nearby.

“Not even the blood of Jesus could have restrained him on that day. He was like a wild bull,” Bacchus-Baptiste said.

“You won’t restrain someone and be hurting them,” Antoine retorted.

The lawyer said that Victory had boxed Mrs. Morgan on her left hand. “Obviously, if you are wrestling up, you will butt up,” Antoine replied.

The prosecution closed its case on Friday and the hearing has been adjourned until June 2. Magistrate Rickie Burnett is presiding.