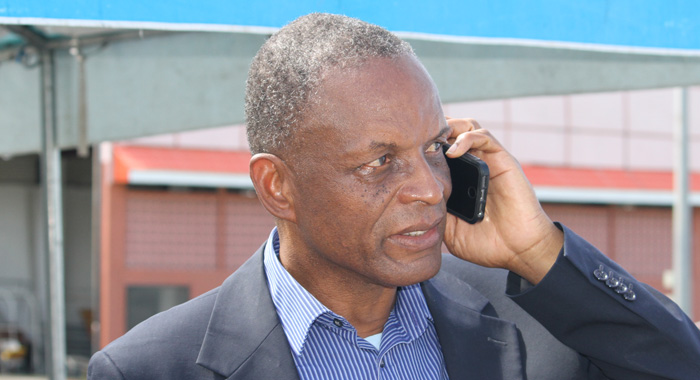 Then-President of the SVG Football Federation, Venold Coombs speaks on his cellphone at a football event in Kingstown in April 2017. FIFA on Tuesday banned him from all football-related activities  administrative, sports or otherwise  for two years and fined him US$40,000 (iWN photo)

Head of the St. Vincent and the Grenadines Football Federation, Venold Coombs, has described as “total foolishness” rumours that he was arrested in the United States earlier this month.

“And when you hear foolishness, total foolishness,” he told iWitness News in Kingstown on Saturday.

Coombs, who recently returned from a trip to the United States, said that long before he left St. Vincent and the Grenadines, he indicated that he would be visiting a relative in Aruba who he had not before met.

He said his first cousin is a government minister in the Dutch Caribbean island and he decided to take advantage of his travel itinerary to visit.

“Remember I always say I have a whole set of aunts and uncles and thing like that. I was there, spending time, relaxing. And then again, I have my mother in Trinidad. I took the opportunity, how is Aruba, passing through Trinidad and thing like that and spend some time.”

He reiterated that the rumours were “just total foolishness”.

“And that is the nature of public life. You go up through a lot of mischief, challenges,” Coombs told iWitness News.

He said he was “never” arrested regarding any FIFA investigation, as was rumoured, nor was he arrested at all.

“I have never been questioned in America by any FIFA investigation at all.”

Coombs said his recent trip was on football matters and the booking was from Aruba to Miami on the outbound leg and Miami-Trinidad-St. Vincent, “because of flight problems”.

“I have been to Miami about four-five times in the last four to five months,” Coombs told iWitness News.