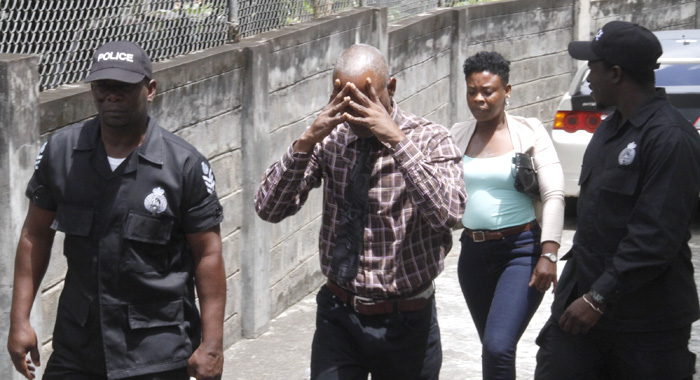 Martin James hides his face as police escort him from court after he was freed on a murder charge. He is accompanied by an unidentified woman. (iWN photo)

The two men who were charged with the Oct. 7, 2016 murder of a 10-month-old baby and the attempted murder of his parents, were, on Tuesday, freed at the preliminary inquiry stage.

Prosecutor Adolphus Delplesche noted that the men were discharged, rather than the case against them dismissed — suggesting that the Crown may consider bringing the charges against the men again.

While James was free to leave the court, his co-accused went back to Her Majesty’s Prisons to continue a sentence for firearm possession.

James, however, did not leave the court immediately, as his lawyer, Grant Connell, told prosecutor Adolphus Delplesche that his client was requesting police escort from the court precinct — presumably out of fear for his life.

There were some tense moments outside the court after James was seated in the rear seat of a twin-cab unmarked police pickup assigned to the Rapid Response Unit (RRU).

While James and a female companion were embarking the vehicle, the driver exited and went into another part of the building, leaving the passengers alone in the vehicle.

Two RRU officers were on the scene at the time and had escorted James from the court to the vehicle.

As the tensions increased during the wait, Connell, along with Station Sergeant of Police, Nolan Dalloway of the RRU, inquired about the driver of the vehicle but no one seemed to know why he had gone into the court building.

Dalloway was about to escort James back into the court building for safety reasons when the driver of the vehicle returned and the group left the scene shortly after.

James and McFee were charged with the murder of baby Mozari Lee and the attempted murder of his parents, Mozart Lee and Shelly-Ann Durham.

The baby died after being shot in the chest at his father’s workshop in Glen, where gunmen had fired at Monty Hillocks, a resident of Belmont.

The baby’s parents were also injured in the attack.

The case fell apart after the court had earlier on Tuesday denied an application by the prosecution for an adjournment.

Senior Prosecutor Adolphus Delplesche had told the court that the adjournment was to facilitate the receipt of evidence from a witness under the Witness Special Measures Act.

The prosecution had intended to call Hillocks, who reportedly had concerns about his safety, to give testimony, by video link.

Since the attempt on his life that lead to the death of the baby, Hillocks was himself hauled before the court on gun and ammunition charges.

He was arrested last December and charged with possession of a 9 mm semi automatic Glock pistol and 14 rounds of ammunition, without a licence.

He was freed of those charges in March.

The defence objected strongly to the prosecution’s request for an adjournment on Tuesday, with Connell accusing the prosecution of engaging in legal gymnastics, which Delplesche denied.

The prosecution then called its final witness, detective inspector Sherol James, the lead investigator in the case.

After the court heard James’ evidence, the defence counsel made no-case submissions, which were upheld.