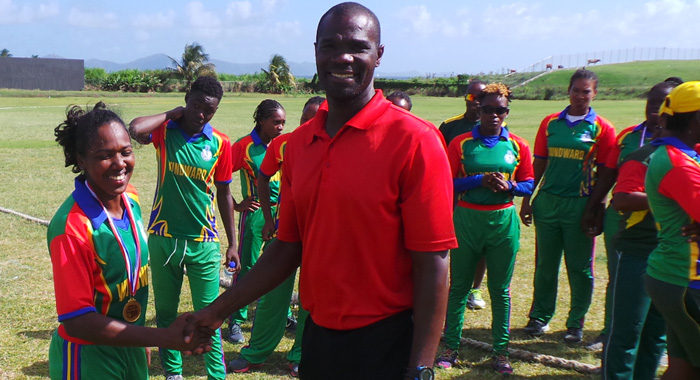 The Windward Islands overcame late nerves and a battling Jamaica to earn a hard-fought 2-wicket win at the Sion Hill Playing Field to chalk up a third consecutive win when the West Indies Womens Super50 continued on Monday.

The Windwards were put in a position of dominance by their bowlers, led by captain Afy Fletcher, after winning the toss and inserting their opponents, who they dismissed for 83.

The Windwards began their response just before lunch in search of what should have been an easy target of 84 in 50 overs at a rate of less than 2 runs an over. They were off to a troubled start when the struggling Juliana Nero (5) was LBW by Jamaica captain and offspinner, Stafanie Taylor with the total on 10.

It was soon 15/2 when the in-form Cordel Jack (1) was bowled by Vanessa Watts in the 9th over.

The Windwards went to lunch 18/2 off 12 overs as the Jamaica spinners set about making a fist of the contest.

Swayline Williams was joined by captain Fletcher (23) and the pair went about repairing the innings and set their team on the road to victory with a partnership of 38 in 11 overs before the latter went at 53/3.

The Windwards batters then appeared to wilt under the pressure as they lost wickets in a heap to slip to 65/6 when Williams’ (23) 70-ball inning came to an end when she lofted a catch to mid-off. The Windwards then had lost 4/12 in the space of 8 overs. It was then left to the tail-enders to rake and scrape every run in a tense final period with the Windwards losing a further 2 wickets at 69/7 and 84/8.

Earlier, Fletcher maximising the help offered by the Sion Hill, square-ended with the impressive figures of 9.2-1-13-7 as she picked up the last 7 wickets to earn the player of the match award and keep her team on course for a place in the final.

Trinidad and Tobago vs Leewards

In another match, this time at the Arnos Vale Sports Complex, defending champions Trinidad and Tobago had another comprehensive victory when they whipped the Leeward Islands by 8 wickets, before lunch.

The Leeward Islands who have been made to struggle in all their matches were shot out for 76 in 28.3 overs with Anisa Mohammed having figures of 4 for 18 from 8.3 overs, Karishma Ramharack 2/10 and Caniesha Isaac 2/26.

The Trinidadian then galloped to 79 for 2 in just 10.4 overs, with contributions coming from Britney Cooper 27, Stacy Ann King 19 and Felicia Walters 18* not out.

Barbados put in another good all-round performance to brush aside Guyana by 42 runs at the Park Hill Playing Field for their third win on the trot.