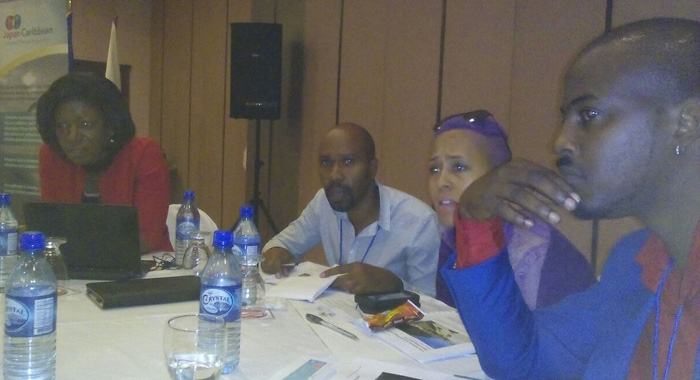 Journalists from across the Caribbean met in Belize for a climate change capacity building workshop hosted by Japan-Caribbean Climate Change Partnership Project (JCCCP) and the United Nations Development Programme (UNDP).

For two days, journalists were exposed to topics including: The fundamentals and myths vs. reality of climate change, how to get climate change on the fore-front, and communicating to impact behaviours (COMBI).

At the official opening ceremony held on Wednesday 26th April, 2017, JCCCP-UNDP Project Manager ,Yoko Ebisawa, expressed gratitude to counterparts in Belize for their support to host the workshop and to participants for accepting the JCCCP’s invitation.

Ms. Ebisawa said that climate change was one of the most serious challenges to the Caribbean and to Belize, as well. She reiterated that the initiative aimed at improving energy security, transfer technology and to strengthen networks through information sharing.

On the first day of sessions journalists were exposed to topics including: The fundamentals and myths vs. reality of climate change, how to get climate change on the fore-front, and the second day, digital tools for storytelling and communicating to impact behaviours (COMBI).

The workshop also includes interactive activities, and a field visit to the Southside, Belize City. Southside is a coastal community that has experienced significant flooding due to extreme weather events and poor coastal adaptive measures.

St. Vincent and the Grenadines is represented by K’sha Woodley of the Agency for Public Information (API), Ernesto Cooke News 784, Chanolde Munroe of the Searchlight Newspaper and Susan Lewis News newspaper.

As a fore-runner to the workshop, the JCCCP-UNDP team launched a climate change community awareness captioned, “Be a part of the change” to celebrate Earth Day in Belize. The team distributed to villagers inflatable LED solar lights and reusable shopping bags. The main facilitators of the workshop were: Managing Director, Valinor Research and Consulting, Dr. Kalim Shah; Media and Communications Training Expert, Dr. Everold Hosein; and Media and Journalism Training Expert, Ms. Mary Owen.