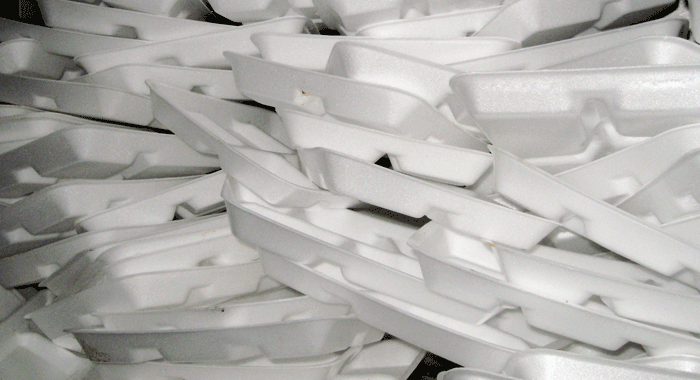 Styrofoam is very common in the food service industry in St. Vincent and the Grenadines, but is very difficult to dispose of. (Internet photo)

The first phase of the government of St. Vincent and the Grenadines’ ban on Styrofoam products in the food service industry came into effect on Monday, May 1.

But it will take a further eight months before there will be a total outlawing of the serving or packaging of food in Styrofoam, which some persons say is linked to cancer.

Gonsalves, who is also Minister of Economic Development, however, noted that the impact on the ground would not be felt immediately.

The regulation says that Customs would allow into the country a shipment of Styrofoam if the importer can prove that it was ordered before the ban came into effect on May 1.

This grace period will expire after 90 days.

Then, businesses, including food handlers, have until Jan. 31, 2018 to dispose of all their Styrofoam products.

The ban will also apply to the Styrofoam egg trays as well as trays on which supermarkets package certain meat products, fruits, and vegetables.

Gonsalves noted at a press conference that Styrofoam is non-biodegradable, difficult to recycle, and is very commonplace.

He further said there might also be some health-related impact linked to the use of Styrofoam.

He said the ban must be taken in the context of the nation’s efforts at renewable energy and the banning of the hunting of turtles.

He further said that it must be seen as part of the thrust to position St. Vincent and the Grenadines as a green country for its own good and also as the nation positions itself in the eyes of the international community.

Gonsalves said the government considered a number of factors in how it wants to shape the ban, including the scope of Styrofoam products to be banned.

The law, however, does not extend to the Styrofoam packaging in which some appliances are shipped, which is also banned in some jurisdictions.

He said the ban was also framed after consultations with businesses, but said his government recognises that banning Styrofoam is not banning litter.

He said extensive work has to be done in Kingstown and its environs, in particular, to ensure there is increased adequacy of trash receptacles and better education of consumers about where and how they dispose of their products.

“The last thing I want people to think coming out of this is that now that my chicken and fries are in a biodegradable container, I can toss it out of my car window and drop it anywhere on the street, because it is still garbage, it still takes a while to biodegrade and we wouldn’t want to do that to our city, to our country, to our natural environment.”

SVG is the second Caribbean Community nation — after Guyana — to ban the importation of Styrofoam.

Gonsalves said the regulations are modelled on the Guyana law, but has some important distinctions.

“I want to say that I am very, very proud of the government of St. Vincent and the Grenadines for acting in a forward looking manner on this very important environmental point,” he said.

He said SVG is impacted in a number of ways by the actions of others regarding climate change and litter brought to its shores by the tides.

“And it is all fine and good for us to say that, ‘Woe is me. The world is contributing to my environmental malaise’. But we also have to show the international community that on matters relating to the environment, we have our own commitment and we have our own dedication to environmental probity and to proper care of our environment, of our oceans and of our own sustainable development going forward,” Gonsalves said.

Effective Feb. 1, 2018, anyone who is served with a notice to comply with the act and fails to comply within the time specified within the notice, is liable on summary conviction to a fine of EC$5,000, or imprisonment for 12 months, or both.