Straker dares NDP to sue him over US citizenship claim 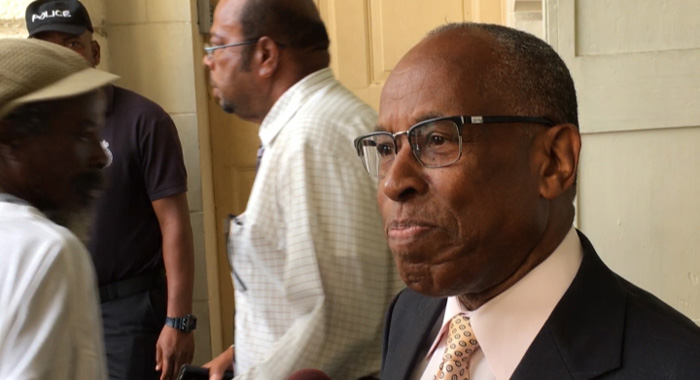 Seven months after a lawyer for an opposition politician wrote to Deputy Prime Minister Sir Louis Straker giving him seven days to prove he is not a U.S. citizen, or resign, the senior politician is challenging his accusers to take him to court.

“They’re just desperate; they don’t know what to do. Seven months since they gave me seven days in which to resign. It’s seven months and I beg them to bring the matter to court and they can’t bring the matter,” Straker told reporters last week outside the High Court in Kingstown, where petitions challenging his election were being heard.

In the Sept. 30, 2016 letter, delivered to Straker on Tuesday, Oct. 4, lawyer, Kay Bacchus-Baptiste, gave Straker the ultimatum, on behalf of her clients, Ben Exeter and various persons entitled to vote in the Central Leeward elections.

Exeter, the main opposition New Democratic Party’s candidate for Central Leeward in the December 2015 general elections, lost to Straker, according to the official results.

However, the NDP has rejected the results and have filed a petition challenging Straker’s election as well as his Unity Labour Party’s victory in North Windward.

In her letter, Bacchus-Baptiste said:

“My clients have instructed me to request your resignation within seven days of today’s date or produce proof of the date of any renunciation of your U.S. citizenship, failing which a High Court action will be commenced to hear and determine the question of whether you have been validly elected as a representative for the constituency of Central Leeward.”

Straker was a long-time resident of the United States and has said that he gave up his U.S. citizenship before returning home to contest the 1994 elections, which he won.

The constitution of St. Vincent and the Grenadines bars holders of certain citizenships, including United States citizenship, from being elected to Parliament.

The NDP has asked Straker to provide proof that he is no longer a U.S. citizen.

Speaking to reporters last week, Straker said the NDP is “fooling gullible people in their party and I feel sorry for them.

“People are being misled and I pity them because they are not thinking,” said Straker, who had initially retired from politics in 2010 but was called out of retirement in 2015 to stave off the challenge by Exeter, a first time candidate who returned home from Canada to get involved in politics.

“If I could have stolen ballots from a box, don’t you think that it would [have been] easier to steal a dozen ballots from Chateaubelair,” he said, mentioning the town in North Leeward, a constituency that the NDP retained by 12 votes.

“And they (NDP) have their agents there, they can’t get one of their agents to tell anybody that any stealing went on. They can’t get anybody to say that, but they’re still pursuing the matter. Let them go ahead. My people in Central Leeward, they not only say they are making a fool — they use a stronger word but I’m too civil to use that word,” said the 74-year-old politician, who is also Minister of Foreign Affairs.

In response to the petitions, lawyers for the government have filed a motion asking the High Court to throw out the petitions as invalid.

During last week’s court proceedings, lawyers for the NDP argued, among other things, that the motion is an abuse of the process.

Justice Esco Henry has reserved her judgment in the matter.

The ULP won the 2015 general elections and a fourth term in office by winning eight seats in the 15-member parliament, while the remaining seven went to the NDP.