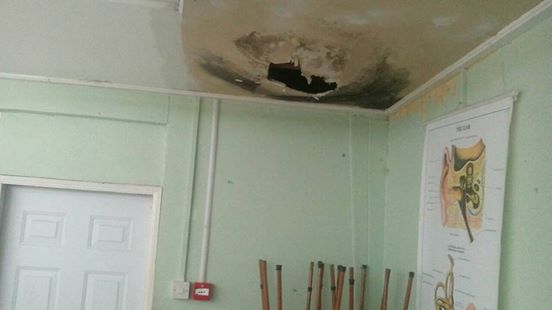 The Teachers’ Union has expressed “alarm” over what it says are “the deteriorating conditions at the many schools” across St. Vincent and the Grenadines

The union, in a statement this week, said it is “extremely concerned” about the situation and said the schools include Kingstown Government School, Kingstown Anglican School, and the St. Clair Dacon Secondary School.

“The SVGTU calls on the Ministry of Education to take immediate action and implement the steps necessary to correct the situation,” union spokesperson, Wendy Bynoe said.

“The Union contends that these schools are currently unfit for use as they pose a significant threat to the health and safety of staff and students and other users of the building.”

Bynoe said that the union has brought the matter to the attention of the relevant authorities and to date “very little or nothing has been done to effectively address the matter”.

“In the meantime, the situation worsens as termites, rodents, mosquitoes, sewerage problems, as well as the decaying structure, and the general state of disrepair, continue to create grave fear and anxiety among staff, students and parents who are understandably concerned about their health and safety.

“The Union will issue an advisory to its members soonest and encourages the authorities to take immediate action and the steps necessary to address these concerns,” Bynoe said.

Speaking at a press conference this week, Prime Minister Ralph Gonsalves acknowledged the public discussion about the state of some of the nation’s schools.

He said that work on the Dorsetshire Hill Primary School, which commenced last September is due to be completed in August.

The project is financed by a World Bank loan and, in the interim, the government has an agreement, until July 31,with the Dorsetshire Hill Evangelical Church, where the students are doing their schooling.

Gonsalves said the Kingstown Government School is to be repaired and upgraded in a way that it will also be a disaster shelter.

“The project is being held up, I will tell you this, because the Ministry of Education is unable to find suitable space to relocate the students.”

He said the Ministry has initiated discussion with a couple of entities to house some students.

“The resources are available for it to be done but if we are going to do over that school, we have to move the children somewhere and that is the problem we have been having.”

Under the Basic Needs Trust Fund, roof maintenance has been done at the Diamond Government School. Further, the government has changed the doors, installed aluminum windows on both floors and repaired the existing concrete stairs.

They have also constructed a new kitchen and dining block and this is on-going as part of an EC$488,000 contract.

“One of the things I want to say is this: during the storms we’ve had, our schools have taken a battering — many of them… and our roads and our bridges and so on,” Gonsalves said.