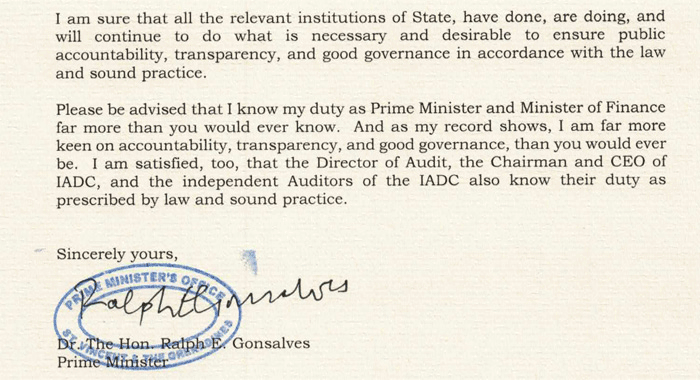 Leader of the Opposition, Godwin Friday, says he is not dissuaded by Prime Minister Ralph Gonsalves’ “insulting” response to his letter asking the government to account for the monies spent to build the Argyle International Airport, as well as the finances of PetroCaribe.

In a May 2 letter, Friday told Gonsalves that his “strictly legalistic” position that the accounts of the state-owned International Airport Development Company (IADC) do not have to be laid in Parliament is “unfortunate and incorrect”.

Friday said that the position of his New Democratic Party (NDP) is that “in a modern, properly-functioning democratic society, public money cannot be spent in the dark.

“If we are to develop and progress as a country and people, public accountability must be a fundamental and necessary component of that journey,” Friday said.

‘I know my duty as more than you would ever know’

Gonsalves, in a May 8 response, defended his administration, before engaging in a personal tirade against the opposition leader.

He said that since coming to office in 2001, his Unity Labour Party (ULP) has placed the issues of public accountability, transparency and good governance “at the centre of its praxis, particularly in respect of the appropriation and expenditure of public monies”.

The prime minister said that successive ULP administrations have ensured that the institutions of the State, which are central to financial accountability, have been strengthened considerably.

He further said that his government’s efforts to strengthen the constitutional roles of the Director of Audit and the Public Accounts Committee in the proposed Constitutional Reform came to naught because of the success of the NDP’s “opportunistic ‘No’ campaign” in the Referendum of November 2009”.

In ending the letter, Gonsalves said: “I am sure that all the relevant institutions of State, have done, are doing, and will continue to do what is necessary and desirable to ensure public accountability, transparency, and good governance with the law and sound practice.”

He then took a personal jab at Friday, saying:

“Please be advised that I know my duty as Prime Minister and Minister of Finance for more than you would ever know. And my record shows, I am far more keen on accountability or transparency, and good governance, than you would ever be. I am satisfied, too, that the Director of Audit, the Chairman and CEO of the IADC, and the independence Auditors of the IADC also know their duty as prescribed by law and sound practice.”

The NDP has been demanding that the government lay before Parliament the accounts of the IADC, which was set up in 2004 to construct the AIA.

However, the government had declined, saying that the law mandates only that the accounts be lodged at the Commercial and Intellectual Property Office (CIPO).

Further, they have said that the call for the IADC accounts to be laid in Parliament is another veiled attack on the AIA.

But Friday said that he wrote to Gonsalves to give him an opportunity to respond directly to him and the concerns the NDP has raised regarding accountability.

“And I thought that he would have taken the opportunity to respond in a constructive way, but in fact, the letter, it was basically more defensive, condescension and looking down on the leader of the opposition and treating me as if basically, I have no right to ask him these questions,” Friday said in an interview on Friday.

Friday said he does not understand how Gonsalves, as Minister of Finance, could feel that the opposition leader has no right to ask him to account, according to law, about how government’s money is spent.

“It is the most basic question we can ask. And we will continue to ask it,” Friday said, adding that he is disappointed in the way that Gonsalves phrased the letter.

“There are a lot of things in there that could make anybody upset.  But, of course, I am not going to deal with this as a matter for me, my ego, and so on. This is a matter for the business of the people and so I will come back to the central matter as to what is required for accountability and insist that the government meets it.”

He said Vincentians expect him, as opposition leader, to ask these questions.

“I hope that he (Gonsalves) will reconsider what he has written and say, ‘Ok. Let me try to respond to it in a more constructive way.’”

Friday said that the NDP will continue to press the issue.

“I am not going to say what action we are going to take because this is a matter of political strategy as how you proceed with this thing to get the best results on behalf of the people.”

He said the issue resonates with people and that is why it has continued to be prominent in the media.

“It means that the people are concerned about it. They are very interested in getting a proper answer and we will continue to ask the question on behalf of the people and we will take different actions as the situation warrants it,” Friday said.

“And the tone of his response in the letter doesn’t’ dissuade me in any way. It is insulting but that is water off a duck’s back, as far as I am concerned. For me, the question is what is happening and the people want their accountability, they want the government to account for the use of public funds, especially when you are talking about over $700 million in terms of the IADC, according to their own reckoning, and the monies that have passed through PetroCaribe and so on.

“It’s reasonable to expect people to ask for proper accounting, according to the Constitution and the other laws and we will continue to ask for them,” the opposition leader said.