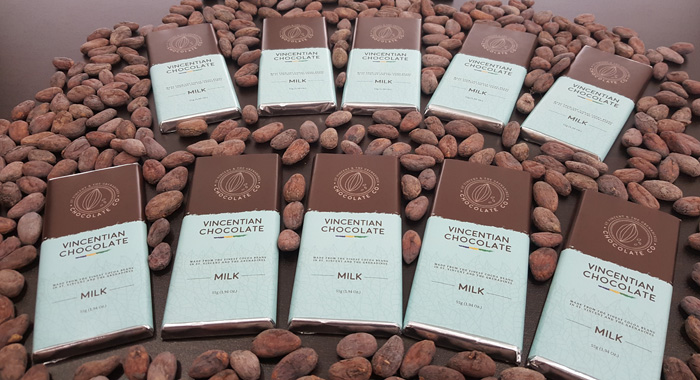 The milk version of Vincentian Chocolate, a locally produced confectionary, has been a hit on the market, says its manufacturer, St. Vincent Cocoa Company (SVCC).

“We have had all compliments about it and within two weeks we have sold 8,000 bars,” Harry Marriot, chair of SVCC told iWitness News, noting that all sales were local.

He said the product is distinguished by the fact that it is extremely good quality, is made from the highest quality cocoa beans, and that it is Vincentian.

“When we eat Vincentian Chocolate, we are eating something in the top 3 per cent of the world’s chocolate…. The flavour profile of our chocolate is superior to the rest of the bulk chocolate that is produced in the world.”

Fine flavour chocolate would usually have an additional value of $1,000 per tonne compared to bulk cocoa, Marriott explained.

The milk chocolate was launched just about six months after the SVCC launched its dark chocolate, last September.

Both products have been doing excellently, but the company has noted that dark chocolate is more of an acquired taste.

And within the six months since it has been producing chocolate, the SVCC has had to the honour of having its chocolate being selected to be used to make the Queen’s Easter egg this year.

“In six months, having the Queen eat our chocolate is pretty cool, I think,” Marriot noted.

But Managing Director of SVCC, Andrew Hadley, noted to iWitness News that the company is really about producing cocoa, adding that chocolate is an aside to what they do.

Hadley said that the company uses about six tonnes of cocoa for their chocolate factory but thinks that SVG will take a maximum of 15 tonnes.

Therefore, effectively, only about 15 acres of cocoa can be allocated for local consumption even as the company has already planted 600 acres of cocoa.

Much of the cocoa trees is just a few years old and hasn’t started to produce.

Cocoa trees begin producing after about three years, but farmers will get a meaningful return on their investments after five years.

Cocoa cultivation has been introduced to a market where farmers have been growing bananas for a half-century.

Unlike a banana field, where a farmer can reach fruits ever week, about six months after they plant the trees, a cocoa farmer has to wait three years before harvesting the first pods, and another four years before the tree reaches maximum productivity.

“In [the] long run, it is a very profitable crop and in the meantime — those three years — you intercrop with other crops,” Marriot said.

Hadley explained that in the first three to four years of its life, a cocoa plant likes 70 per cent shade.

Therefore, in the first few years, a farmer can intercrop cocoa with plantains, bananas, and papaya — “anything that will shade your cocoa,” Hadley said.

“So, at the same time, you have cash flow for the farmer,” he told iWitness News.

About the time that the cocoa starts bearing, that is when the other crops will have to be thinned out.

At this time, a farmer can then plant, among the cocoa, hardwood trees such as mahogany, red cedar, and blue mahoe.

“So that is your long-term money. Your medium- and long-term is your cocoa, plus your hardwood trees, and the short-term is the bananas, plantains, papaya,” Hadley said.

Marriot acknowledged that it is quite a mental leap for a farmer who has been planting another crop for a few decades to switch to cocoa.

He said one of the questions would be market guarantee.

“I think once we start shipping cocoa and they start looking over the fence at the friends who planted cocoa a few years ago and are now making a lot of money — because we guarantee to buy the cocoa back from them — they would be thinking, ‘Wow, maybe I should have gotten into it’,” Marriott said.

The cocoa company cultivates about 600 acres of land in St. Vincent. It has bought about half of that amount and has leased the remainder. In addition, farmers own about 150 acres.

The cocoa company employs some 200 persons, most of whom are involved in the actual cultivation, and are paid between EC$40 and $50 a day to work from 7 a.m. to 1 p.m.

Amidst the success of its products, the company faces a number of challenges, including road access to farmlands.

“The internal roads are in a poor state, which is understandable. This is not trying to be controversial. They are in a poor state — everybody knows that; There is no point denying it — because much of the internal lands are not being farmed. Why would you fix the road if no one is using it,” Marriot said.

Hadley added: “You can’t get grants to fix those roads anymore, because they (donors) are gonna come out here and say, ‘Why are you asking us for money to fix these roads and there is nobody farming?’”

Another problem is the theft of agricultural products. However, Marriot said that his company has a system to ensure it only buys beans from registered farmers.

“Our cocoa is fully traceable,” Hadley said. “From the farmer, from the chocolate bar, we know who the farmers are so there is no point stealing.”

Another challenge is getting good quality managers.

“What we’ve got so far is quite good,” Marriot said.

Hadley chimed in, saying he thinks Vincentian workers are some of the best in the world.

“Middle management is where they are let down. That’s our problem. We don’t have people who can really motivate, take the lead…”

The cocoa company buys only wet cocoa bean, as it has its own process of preparing the beans for chocolate and, later, for export.

“It is important that there is consistency and that why they only buy wet bean,” Hadley said.

The company has not shipped any cocoa bean overseas as yet, but have already been offered “all sorts of contracts by big companies”.

They are, however, not accepting any of these contracts as yet “because we know that it is going to be in high demand and there is a current world shortage of fine flavour,” Marriot told iWitness News.