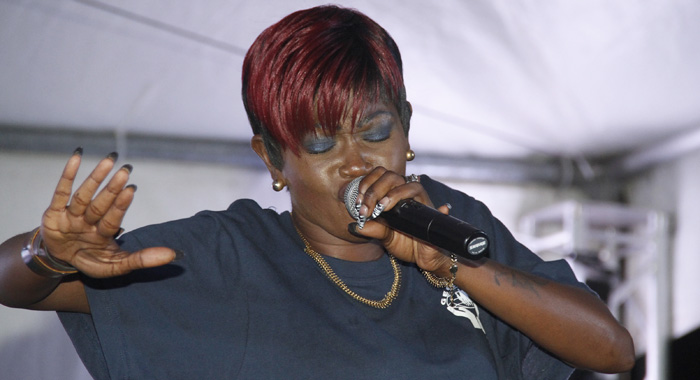 Vincentian calypsonian, Lornette “Fya Empress” Nedd will long be remembered as the bard who took the calypso group in her adopted home, Trinidad and Tobago, to court to defend her exclusion from qualification to compete in the national calypso finals there.

Amidst that legal fiasco, what might have been lost to many Vincentians, however, was the equally controversial song — “Guilty” — that earned her a pick in the finals — before her place was challenged on the basis of her nationality.

But the storyline was not lost on patrons at the launch of the St. Georges Carnival on Saturday in Calliaqua, especially when it became clear in the last verse, that the persona had, in fact, caught her husband in bed with another man.

The song forces a generally homophobic Caribbean society to confront a number of issues, including whether it is acceptable to inflict violence on a cheating partner, men marrying women to hide their homosexuality, and gay men who taunt openly gay or suspected gay men so that people won’t suspect that they are also gay.

After the Trinidad court ruled that Fya Empress must be allowed to remain in the calypso finals, she went on to place 15th out of 17 in the finals.

But the bard, who has won double crown before at home, may very well be a strong contender this year – if the response at Calliaqua is anything to go by.

Fya Empress’ performance on Saturday was just one of more than 20 performances by artistes from Upstage Xperience Calypso Tent in a free show held as part of the launch of St. Georges carnival.

The tent used the opportunity to show off its seasoned veterans as well as introduce a number of new artistes.

Among the new artiste who made the biggest impact was Joanna Christopher, who has moved front stage — from back vocalist — this year with her song, “Where All My Good Friends Gone”.

The resonated with the crowd, not only because of Christopher’s beautiful voice, but also because of the topic of the song: the divisive nature of Vincentian politics.

She spoke about the inseparable nature of childhood friendship and the manner in which friends would face troubles together.

“But as soon as we were eligible to vote, that’s when trouble start,” Christopher sang.

In the chorus, she said she would like to know where are all the good friends gone.

The artiste, who used the stage name Joanna Christopher has now become the third Christopher to be active in the calypso arena, joining her relatives Kristiana “Singing Kristy” Christopher and her brother, Kristian, all of whom are from Layou.

Saturday’s launch was held in conjunction with Plug & Play, an initiative by Member of Parliament for East St. George, Camillo Gonsalves, to revive live music in St. Vincent and the Grenadines.

“This is a wonderful event,” Gonsalves told the gathering at the Calliaqua Hard Court, adding that the first Plug & Play event — even before it was called Plug & Play — was a year ago when they invited Upstate Xperience to the same location.

“And we had a wonderful show and from that event and some other conversations with people like brother Bomani and others, we decide to bring live local music and make it a staple and a feature of Calliaqua, of this area, and of St. Vincent and the Grenadines.”

He said it was fitting that, a year later, they have again invited Upstage Xperience to perform at the venue.

Gonsalves expressed hope that the St. Georges will have the best rural carnival.

Also addressing the gathering, Foster Hannibal, chair of the St. Georges Carnival Committed. He said this is the 16th year for carnival activities in East St. George.

He said it must be noted that Upstage is there performing at the event because of two calypsonians who were also participating in the night’s activities: Shaunelle McKenzie and her father, Gosnel “GC” Cupid.

Hannibal said that 16 years ago, a then 16-year-old McKenzie and her father reorganised carnival activities in the area.

He said that changes have been made to the festival this year, the first being that queen and calypso show will be held after the carnival events.

Further, the route for the j’ouvert will go through Villa-Glen and the jump-up will start from Huffles at Brighton, making its way to Calliaqua.

This year is 40 years since Vincy Mas was changed from a pre-Lenten to a summer festival.

And among the songs that moved the crowds as Raeon “Maddzart” Primus’ “Celebration”, which like Alston “Becket” Cyrus’s “Vincy Mas”, will continue to be an anthem for the festival for years to come.

“It’s actually a good experience to come here in a rural carnival and see a full-fledged calypso tent performing, because what we want to do at CDC is to ensure that the rural carnivals, in the future, become the feeder systems into our national festival and, so to the extent that we can take the rural festivals and partner them with the calypso tents and perhaps introduce the partnerships with the queen shows, we can ensure that when we get to the national festival, everybody is representing a zone or a community in carnival.”
Minister of Culture, Cecil “Ces” McKie said he was pleased with the turn out, adding that it is a clear indication that patrons are ready for Vincy Mas

He said that carnival planners will be bringing in extra persons for Vincy Mas this year, adding that a chartered flight from Canada is fully booked and a number of persons are already booked from the United Kingdom and the United States.

“So, this evening, the indications are here. Vincy Mas 2017 is going to be hot, and as you heard from Brother Hannibal, St. Georges Carnival is also going to be hot.”