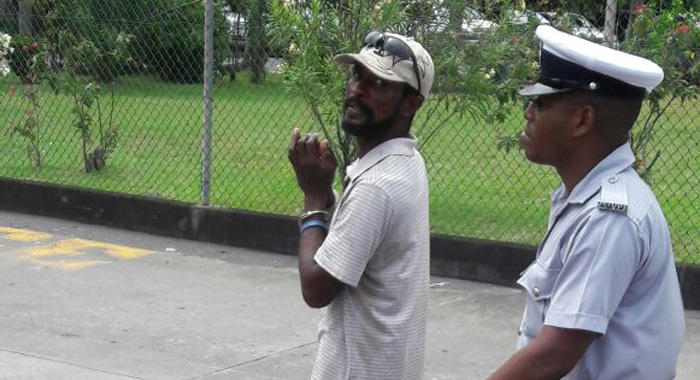 A police officer escorts a handcuffed Otis Lockhart from the wharf to the Central Police Station.

Police on Wednesday said they were holding for safekeeping, the Vincentian man who was taken into custody on Tuesday after he and his American wife and children were found living in deplorable conditions in a tent on the Northern Grenadine island of Bequia.

Superintendent of Police Richard Browne, who is responsible for the district in which Bequia is located, told iWitness News on Wednesday that the man, Otis Lockhart, was being kept by police because he has no fixed place of abode.

Browne said that Lockhart’s wife and children are “being taken care off”, but declined to comment further.

The senior police officer further told iWitness News that police investigations continue to ascertain if any offence has been committed.

He, however, told iWitness News that police had no information to substantiate the claims being made in some sections of the media that Lockhart had abducted members of his family or was holding them against their will.

Regarding Lockhart, Browne said: “He has been taken from his place of abode in Bequia to the mainland.”

Lockhart is originally from Edinboro and Browne said were waiting for his relatives to come in to see what accommodation arrangements can be made for him.

A man speaking with an American accent and claiming to be Lockhart contacted iWitness News by telephone at 8:30 a.m. on Wednesday, saying he had been released from police custody without charge.

In the one-minute call, the man also offered to tell his story to iWitness News.

Subsequent calls to the man’s number went unanswered and police later told us that Lockhart was being kept for safekeeping.

News broke on Tuesday that police had launched an investigation into a case in which Lockhart, his American wife, and their three American children were living in a tent in Bequia for five years.

A police source told iWitness News that the children were “acting like animals” and appeared to be malnourished.

The family, including the three children — a boy around 13 years old and two girls, believed to be 10 and 8 — were taken to the health centre in Bequia for medical attention before they were all transported to Kingstown.

iWitness News has obtained a video of the family disembarking a ferry at the Grenadine Wharf in Kingstown.

The children are walking with a strange gait, but iWitness News is unable to say what is the cause.

In the video, Lockhart is in handcuffs.