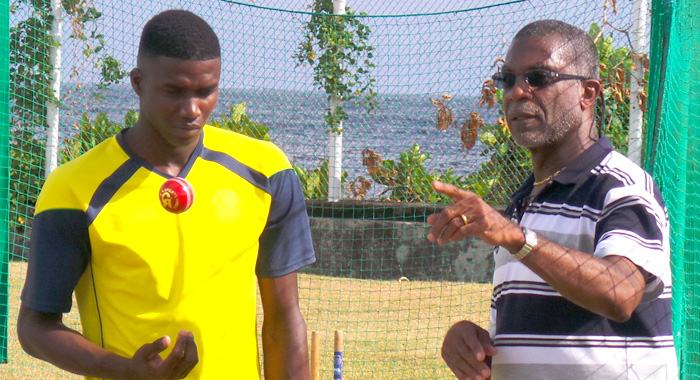 Just over three weeks after undergoing a one-day fastbowler clinic with former West Indies, great Michael Holding, Darius Martin is seeing the benefits of that stint.

The 22-year-old paceman last weekend grabbed 6/15 as he led Police 2 to an innings-and-91-run victory over Carl Joseph Law Chambers ASCO at the Sion Hill Playing Field.

The slim paceman, bowling with impressive pace and good control after being handed the new ball in the second innings, cleaned bowled four of his victims and trapped one LBW as a measure of his accuracy.

Speaking to iWitness News on Sunday just after his excellent returns, Martin attributed his success to what Holding taught him.

“He told me to do two things in particular. One was to do with my run-up and the other had to do with my delivery action,” Martin said.

“I, over the years, used to have a curve in my run-up and as soon as he (Holding) saw it, he told me to do away with that curve and practice to run straight up to the crease. And then I was not looking over my left shoulder when I was delivering the ball so he, again, pointed out what I should so and I worked on that too,” a beaming Martin said.

He explained that after the April 20 session with Holding at the Wilf Slack Nets, he, along with two other colleagues in West Indies T20, pacer Kesrick Williams and Romario Bibby, headed for the nets to work on what they had been told.

“We did a lot of practice trying to work on the things he told us and I am glad that I was able to get it right in this match,” he added.

Martin, a former SVG senior team trialist, had indicated about two years ago that he was considering walking away from the sport as a result of the difficulty of having to hustle while still finding time to fit in his cricket.

That matter was solved shortly after when he was accepted into the local constabulary.

Now, his ambition is to get into the SVG Senior team and move beyond that, with constant practice and listening to experience players.

Looking back at the session with Holding, Martin said: “I was so happy to attend that session. Those guys are real legends and you have to make full use of those kinds of opportunities.”

Holding, who makes regular enquiries about the young pacers, was happy with Martin’s performance and asked that he and the other bowlers continue to train hard and practice good training habits with no shortcuts.

“These guys just need some guidance and encouragement. There is no way the talent has dried up in the Caribbean,” said Holding, who promised to do a follow-up session later in the year.

The former West Indies speedster did the session with ten of the countries young fastbowlers, educating them on the rudiments of fastbowling.

In the session the Jamaican advised the bowlers on how to choose a run-up, the use of the non-bowling arm in the delivery, the follow through, using the seam and positioning of the wrist at the delivery point to get maximum benefit.

Holding said that he had seen some talent among the bowlers and was confident that they can go places.

The Vincentians could be on a longshot but not impossible chance of exposure following the news in March that Holding had been appointed as president of former club Derbyshire.

Holding, 63, was part of the Windies’ feared attack during the 1970s and 80s and played for Derbyshire for six seasons from 1983.