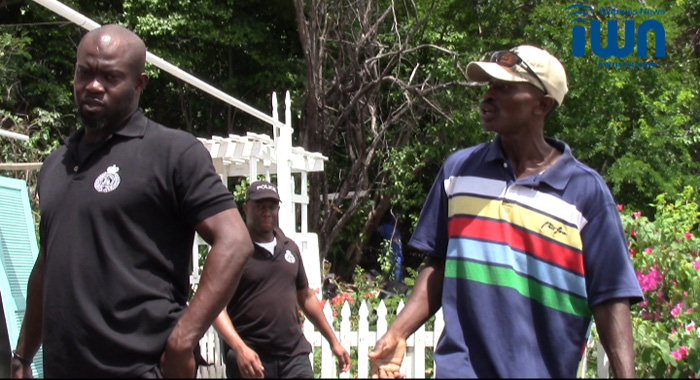 Otis Lockhart chats at his property on Friday with the police officers who arrested him on Monday. (iWN photo)

The man who was arrested in Bequia last week as police investigated a report that he held his family against their will has praised the law enforcement officers for the professional manner in which they conducted themselves.

“There’s a beautiful woman at that Bequia station. I’ve never seen a more professional person in my life and I lived in the United States and dealt with thousands of professionals. Her name is Corporal Phillips. She did her job. She was stern, she was firm, but she was respectful and she did her job. She did me no favours but I have a lot of respect for her; a lot of respect for that woman,” Vincentian-American Otis Lockhart told iWitness News on Friday.

Lockhart was taken into custody in Port Elizabeth where he had gone shopping for the other four members of his family – his wife and three children – who lived with him in a tent in St. Hillary in Bequia.

The family has been living in the tent since 2013 as they developed a camping-style business idea at the property.

Some residents of the northern Grenadine island, however, say that they have never seen the children, who Lockhart said were being home-schooled.

Police later cleared Lockhart of any wrong doing and he is expected to be reunited with his family, all of whom were born in the United States, on Monday.

Lockhart told iWitness News that Phillips went beyond her job and “would basically show that ‘It’s not anything personal. It’s just my job and I am fulfilling my duties’.

“And that goes a long way because sometimes, we get people who take responsibility too much on a personal level and that interferes with the ability to do their work and when the fact comes out, you look at that person as not an objective person and moving forward, you would always have a problem with that person. She’s not one of those people.

“I would always look at here with love in my heart and because of the way she performed her duty because I probably would not have been as objective to me as she was under those circumstances as ‘a guy who holding his family — kidnapping, hostage’,” he said of the police officer, who handled the initial investigation in Bequia, before the case was transferred to detectives in Kingstown.

Lockhart, however, said that there was just one development that really upset him.

“The only thing I was upset about, … just being placed within handcuffs. That’s the only time I said, ‘Is this necessary? I am not a criminal. I have not resisted you guys with anyway.’”

Lockhart was placed in handcuffs – and his wife and children – were transported via ferry to Kingstown on Tuesday.

During the interview, two officers in the uniform of the Rapid Response Unit turned up at Lockhart’s property.

They were accompanied by a third person, presumably a police officer in plain clothes.

One of the police officers told Lockhart that they were there to check to see if his possessions were accounted for.

“These are the gentlemen that did their job,” Lockhart told iWitness News of the officers, tapping them on their shoulders.”

He said the officers were the ones who took him into custody in Port Elizabeth.

Lockhart was born in St. Vincent and was educated up to the secondary school level in his home country, before migrating to the United States.

Lockhart later told iWitness News that when he was arrested he showed the police officers his United States identification card.

He further said he showed the police officers another document that he said the U.S. State Department encourages U.S. citizens overseas to carry with them, which includes information on what U.S. citizens should do if they are arrested overseas.