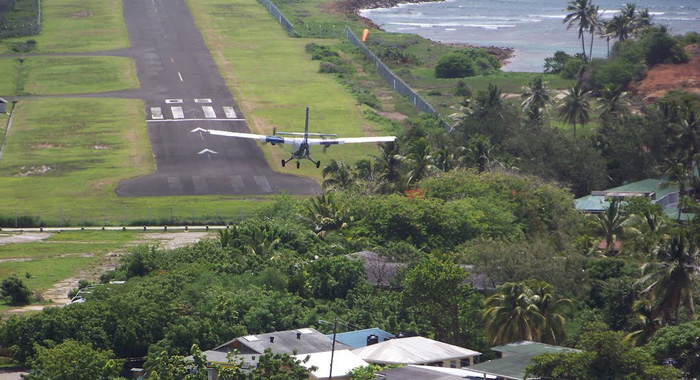 By A concerned citizen

Many were saddened by the departure of what was commonly called the “Fast Ferry”, Jaden Sun. Then we have the “out of service” of the well-known and appreciated service of the MV Barracuda, currently on dock for a couple of months. Thankfully, we have the faithful service of the MV Gem Star, which is the backbone of travel to Union Island. However, one can only get fairly comfortably to Union by boat on Tuesdays and Fridays — the days when Gem Star travels, then from Union to St. Vincent Wednesdays and Saturdays. If you can handle the late night ride, then Guidance may be an option on a Wednesday or Saturday.

But what of air travel? Consider today, persons arrived at the Argyle International Airport hoping to get home to Union Island on their once a day morning flight, only to be told no flight is going to Union. The fire truck down there broke down.

It is not the FIRST, not the SECOND, not the THIRD time that passengers are stranded because of a broken down fire truck! My question is: prior to AIA, how many times was the ET Joshua Airport close due to a broken down fire truck? How many days, if any, was the ET Joshua Airport closed? Now, what is the average condition of the fire truck that is selected to be sent to Union Island? How is such selection made?

The impact of the breakdown of the fire truck, especially between January – May.

So then is the closure of the airport due to broken down fire truck to be taken lightly? Judge for yourself! Well, of course, the small private planes are not affected, as I can see them touch down on the airport. At least they have their own “fire truck” on board, so no problem!

Did you listen to the radio and TV when the announcement was made about the new ambulances and distribution? Those new ones certainly doing a marvelous job to and from the main hospital. Well the health minister cares about the people of Union Island, because for the first time Union Island is on the agenda to receive an ambulance. “He clearly stated that the” OLD “one from Georgetown will be relocated to Union Island”. Yes, old faithful supposed to be sent to Union Island. It does travel to town regularly and is, indeed, roadworthy. I wonder what year model is it?  From the looks of it, it appears that it should attract some environmental fee, similar to the garbage bill, which everybody is supposed to pay. (That one I can’t disagree with because is a good service and it cost money to operate.)

However, the letters about cutting off electricity, can they stick up in a courtroom. Can you cut a service for which a person does not owe? I mean electricity with zero arrears, can VINLEC show up to cut such. Good lawyers can well do with some pocket change or sue money. Why not put a garbage can at the entrance to every house and number them to correspond to each customer. If they don’t pay, cut the service of picking up their garbage and take them to court for environmental harm with the speed of drug cases? Well, is just an idea.

Back to the “new” ambulance for Union Island. I really hope they gave it a nice paint job before sending it down! Make it look as good as the fire truck, but ensure it functions better. Yes, for the occasional unwanted emergencies affecting both tourist and local, they won’t need to be placed in the occasional back of a pickup truck for a trip to the health centre or be forced to stay upright in a passenger van, if available, but instead gain the comfort of a bed in an ambulance. Won’t that be nice! At least the hospital won’t close down service if the ambulance breaks down. If you don’t like to hear the truth, comment, adding your negative feedback.