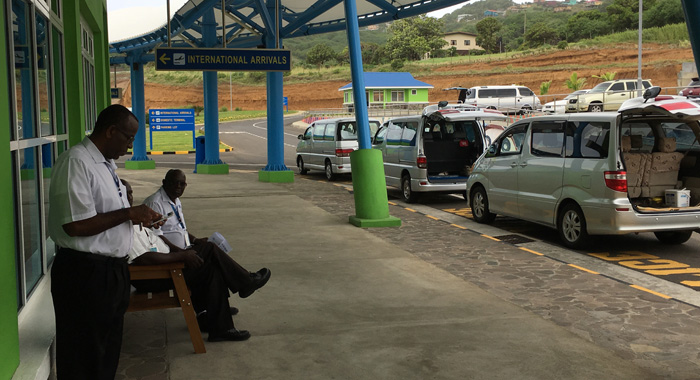 Taxi drivers servicing Argyle International Airport are unhappy with the most recent fares authorities have set for taking commuters to various parts of the country.

“The prices are incorrect,” a taxi driver who gave his name as Bonny, told iWitness News on Sunday as he also spoke on behalf of two of his colleagues.

He said that taxi operators used to charge EC$30 from the E.T. Joshua Airport in Arnos Vale to Kingstown, but now authorities have announced an Argyle-Kingstown fare of EC$65.

“We are at a further distance and the prices are much smaller. These prices are like 10 years ago prices,” Bonny told iWitness News.

He further complained about the price from Argyle to Cedars, which is EC$30.

Authorities have set a base price of EC$30 for the first three miles, after which EC$5 will be charged for each additional mile.

This was done to achieve greater compatibility and consistency with the local fares from Kingstown, according to the document containing the rate, which was circulated to taxi operators recently.

But Bonny said that the base price should be EC$40.

He said he thinks that a fair price from Argyle to Kingstown is EC$80, adding that before the airport was built, taxi drivers used to charge at least EC$70 from Kingstown to Argyle.

Bonny told iWitness News that Argyle to Kingstown and Argyle to Georgetown are roughly an equal distance: 11 miles.

“We want this to be corrected as soon as possible,” Bonnie told iWitness News, adding that these prices are the second set issued to taxi operators since the airport opened on Feb. 14.

“And this one is worse,” he said, adding that the list before had the price from Argyle to Kingstown as EC$80.

Further, the previous list set an EC$60 rate from Argyle to the hotel belt in Villa.

That has since been reduced to EC$50.