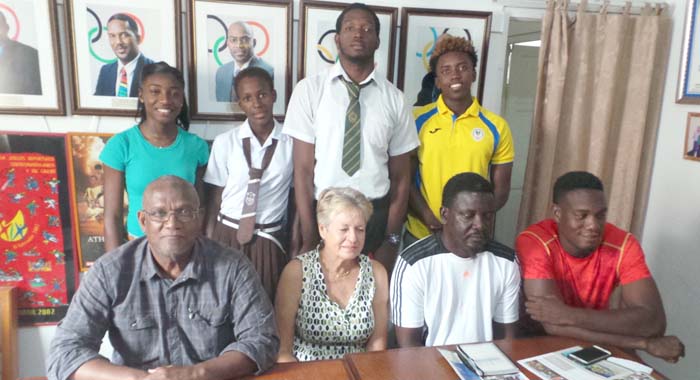 The SVG National Olympic Committee (SVGNOC) will be sending a six-member team to compete at the Commonwealth Youth Games in the Bahamas, thanks to financial support from the Mustique Charitable Trust (MCT) and the David Ross Foundation (DRF).

MCT’s Administration Director, Lavinia Gunn, said that the trust and the DRF have each contributed grants in the sum of EC$60,000 to help with the preparations of the athletes in the lead up to the games, in the Bahamas in July.

In addition to assisting with the preparation of the athletes, the grants will be used for air travel and other related matters, Gunn explained at a media conference at Olympic House.

While Gunn hinted that funds are also provided for possible remuneration for coaches who prepare the athletes, Joseph said that no standard payments are made to coaches, but such an arrangement, if necessary, can be addressed with discretion.

Gunn, who represented both the MCT and the DRF, said that the funding is in keeping with the charitable work done by MCT and David Ross.

“The funds from the trust have been used to help the athletes engage in competitive sports within the region, to attend competitions over the last year,” she said.

She said that the MCT has contributed to development in many areas in SVG and sport has been one such area.

“We believe that as an organisation with development as our priority that coming to the assistance of these athletes fits in with our goals,” Gunn said.

She indicated that the MCT has been involved with a number of programmes at the grassroots level especially in the areas of swimming and table tennis.

“We decided to partner with the St. Vincent and the Grenadines Table Tennis Association and the Swimming Association to help teach children in some less fortunate areas how to swim and to play table tennis.”

She listed some of the areas where such programmes are currently taking place as Rose Place, Layou, Sion Hill Owia and Bequia. In addition, Gunn said they are also funding the Special Olympics recently launched football project “Kick it!”.

She said this is a programme hoping to reach “over 120 intellectually challenged youths throughout the country to give them equal opportunities with their peers”.

Joseph said the NOC entered an agreement a long time ago with the David Ross Foundation and the Mustique Charitable Trust to help with the preparation of athletes from athletics and swimming.

“It is fortuitous, because normally you go to an institution for assistance but in this case the institution came to us,” he stated.

Joseph noted that Ross, who is also a board member of the British Olympic Association (BOA), expressed an interest in helping SVG, following their participation at the Commonwealth Games in 2014 and they subsequently had meetings with him to identify areas of assistance.

Gunn added that Ross’ funding will ensure that the athletes could continue their training and development in St Vincent and the Grenadines and enable them to purchase any sporting equipment and gear that they would need to be at the top of their form and be able to compete against their colleagues within the Commonwealth.