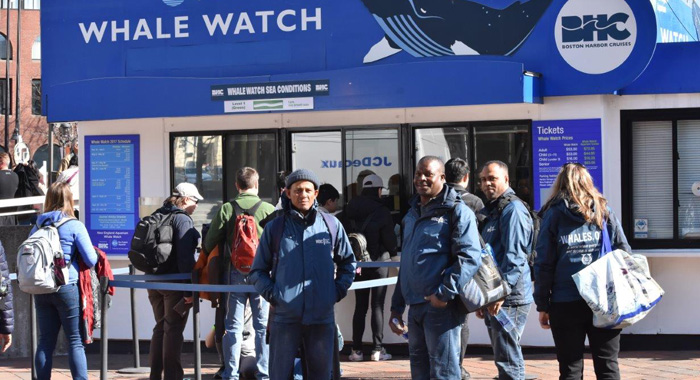 Besides the two-day workshop, they also participated from two whale watching tours and visited a whaling museum in New Bedford, a coastal city which moved from whaling to whale watching.

While out whale watching the men were able to see sei, right, fin, minke and humpback whales.

Excited to talk about what he experienced Kirk Grant said: “We can make a lot of money and help the economy. From January to December in Boston Harbour they make 16 million dollars from whale watching. We were some 17 miles offshore of Boston when we saw humpback whales, right whales, sei whales and fin whales.

“It’s a good move for St. Vincent if we can get more whale watching. We can start from small businesses and become one of the best whale watching places in the Caribbean because we have a lot of cetaceans. As fishermen we go out about two miles off Barrouallie and we see whales pass going north. We have seen orcas, humpbacks, pilot whales and many dolphins.”

Hazlewood said St. Vincent and the Grenadines has to package a naturalist tour, so that if tour participants don’t see whales, they will see dolphins and birds.

“I have experience with spinner dolphins that they are so tame that you can reach over and touch them with your hands. They go up in the air and spin around four, five times. They are amazing to watch.”

Hazlewood said he wishes more students can experience whale watching in St. Vincent. He also noted that the fish aggregating devices put down by the Fisheries Department attract whales, especially the sperm whale. These make it easier for persons to see a whale.

This visit to Boston comes as part of the educational programme being run by Fundación Cethus in Bequia and Barrouallie, funded by the SVG Preservation Fund, among other institutions.

Coordinator of the SVG Preservation Fund, Louise Mitchell, said she is pleased that the trip was a success and persons from whaling communities saw, first hand, that whale and dolphin watching is not only exhilarating but economically exciting as a new industry for coastal communities of St. Vincent.