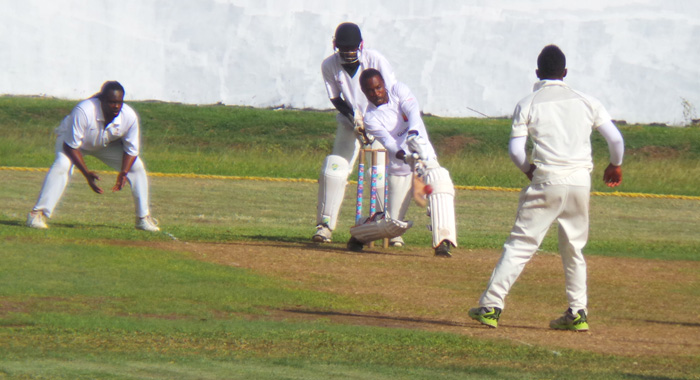 Rolando Wright goes in the attack during his innings of 39.

The St. Vincent and the Grenadines Cricket Association may very well have to take a closer look at the situation regarding the NLA Premier Division following the performance and results within recent times of Carl Joseph Law Chambers ASCO, according some former and current cricketers.

Last weekend, the team suffered yet another innings defeat — their fourth for the season — when Guardian General Saint thrashed them by an innings and 133 runs at the Sion Hill Playing Field.

Persons close to the team have said that they have lost some of their top players over the last year, and, more importantly, within the last few months.

They point to the captain and talisman, Desron Maloney’s recruitment by the local constabulary and experienced opener and top run getter in 2016, Deron Greaves, travelling to the United Kingdom to play in the leagues.

In addition, SVG Under-19 allrounder, Jaheil Walters, who, at the age of 12, made his debut with the team as the youngest Premier Division player four years ago, has decided to move the first division in an attempt to get more playing time.

Sources have also indicated that personality clashes have seen some other players dropping out of the team’s setup and focussing their attention on softball cricket.

Following the latest humiliation, Romel Currency, captain of Guardian General Saints, expressed disappointment with the performance by the ASCO team.

“I am embarrassed. This is not what I expect from a Premier Division team. I am ashamed,” the former Windward Islands opening batsman said as he left the Sion Hill Playing Field.

Reflecting on his entry into local cricket and comparing the standard then, Currency was very ruthless in his analysis.

“Ten or 15 years ago, none of the players on that team would … have made any Premier Division team. They should not be in Premier Division, based on how they are playing.”

ASCO, who came close to beating Victors 1 in the opening match of the season, now sits at the bottom of the standings and are destined to be demoted. Currency believes that, based on the attitude of some of the players, the team could encounter some challenges in remaining together.

In their latest outing, it was once again the batting, which left Carl Joseph Law Chambers ASCO in self-inflicted carnage just after lunch.

On the resumption, they quickly subsided for 57 in 26.5 overs with Dexter Whitfield getting 22. Left-arm spinner Roland Wright returned figures of 7/23 from 13.3 overs with three maidens with Currency 2/10 also getting among the wickets.

Following on with a deficit of 178, ASCO were dismissed for 65 in 14.1 overs as the batsmen wasted little time in exploding the knapsack on their back.

Wright, capitalising on the wrong approach by the batsmen, collected 5/15 for a match hauls of 12/38, while pacer Ray Charles took 4/33 to condemn ASCO to mortification.

Just prior to the end with the last pair at the wicket, players from the ASCO team could be seen making a hasty departure from the ground as they set about getting to an important softball match, which was to begin within the hour.

“I can’t believe what I just saw. That is how Premier Division cricket come now? those guys can’t be serious,” said Victors 1 opener, Anthony Trimmingham, who, along with his cousin, Frederick Trimmingham, had journeyed to the Sion Hill Playing Field to “take in some cricket”.

“Since we came here, not one batsman batted a whole over. Everybody just went in and swiping as if they were in a hurry,” Trimmingham said as they exited the venue.

Frederick Trimmingham, an allrounder who occasionally opened the Victors 1 innings, including against Sion Hill and the lightening quick Winston Davis, also lamented the display he saw.

“There was no ‘big thing’ with the bowling but the batting was really poor. I say at least we going to relax and look at some cricket and a match done just after lunch on Sunday. Joke you making,” he remarked, still a bit shocked.

In the early part of Saturday’s opening day, things were looking up for ASCO after they had reduced Saints to 94/5, with offspinners Kelshun Da Silva (3/50) and Oheyon Toby (2/37) doing the damage.

However, a few dropped catches and fielding lapses saw Saints move into the ascendancy. Their recovery was initiated by Zane Edwards, who fell short of a maiden century, and Wright (39), who added 81 for the sixth wicket. Wright lashed 4 fours and 3 sixes in his inning as the pair took full advantage of the errors by their opponents.

Edwards, despite the loss of his partner at 175/6, looked set for a deserving first ton, but lofted a catch to midwicket to fall for 98. He batted 121 minutes, faced 80 balls and struck seven fours and six sixes. Vincent Cupid got 37 at the top of the innings.