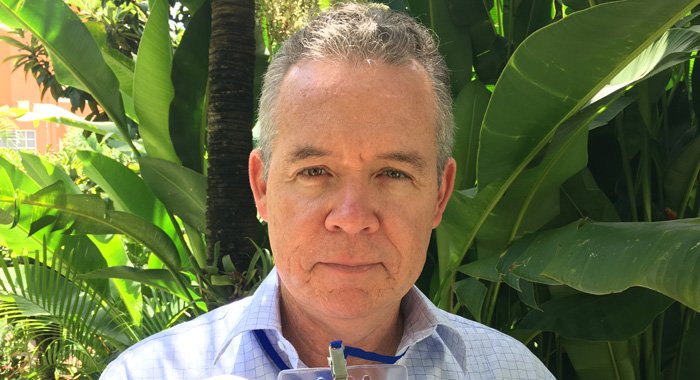 KINGSTOWN, St. Vincent (CMC) – A leading regional meteorologist Tuesday said the Caribbean and other small island developing states are facing an uphill task in trying to convince the world to contain global temperature rise to 1.5 degrees Celsius above pre-industrialisation levels.

In fact, Puerto Rico-based meteorologist, John Toohey-Morales, tells the Caribbean Media Corporation (CMC) that the train has already left the station and is speeding down the tracks.

“We are already at 0.95 degrees above pre-industrialisation levels and unfortunately, the way that temperatures are going, they are accelerating, they are rising faster and faster as the years go by,” Toohey-Morales said.

“This train has left the station, it is, unfortunately, accelerating and being able to limit it to 1.5 degrees seems like a reach to me, seems unrealistic to me,” he said.

Toohey-Morales spoke to CMC on the side lines of a climate and media training for Caribbean media practitioners, as part of the Caribbean Institute for Meteorology and Hydrology’s (CIMH) annual Wet/Hurricane Season Caribbean Climate Outlook Forum.

In the face of human-induced climate change, Caribbean researchers say that a half a degree Celsius change in global temperature could make quite a difference for the region, which is already being severely impacted by the adverse effects of a warming climate.

At the global climate change talks in Paris in 2015, countries agreed to contain global temperature rise to two degrees Celcius above pre-industrialisation levels.

That is to say, that the world must make every effort to ensure that the average temperature of earth’s atmosphere does not increase by more than 1.5 degrees Celsius higher than the levels they were before there were machines and tools to help perform tasks en masse.

Toohey-Morales, however, believes that at the current rate, the world is not on tract for the 2-degree Celsius target.

“… our current pace is for four degrees Celsius — double that. So whatever climate actions need to be taken quickly to mitigate what’s going on,” he said, however questioning whether there is enough emphasis on the Paris climate deal.

“With the United States now not even thinking of participating, to be able to get there, it is going to be quite a challenge,” Toohey-Morales said.

Amidst pressure from the leaders of the world’s seven leading economies, last week, United States President, Donald Trump has still not make it clear whether he would follow through on his campaign promise to quit the Paris deal.

Toohey-Morales said that with his own predictions and the uncertainty of the United States on the climate deal, Caribbean countries need to focus, first and foremost, on adapting to the climate change.

“The people need to put pressure on the authorities and the leaders of each country to make sure that actions are taken to adapt to a warmer world,” Toohey-Morales said.

He said that heavier, extreme precipitation events, longer dry spells, and droughts are just two of the many weather events that the Caribbean is going to experience in a warmer world.

“Yes, help is needed,” said Toohey-Morales, however, noting the role of developed countries in this regard.

“Developing countries such as those in the Caribbean need help from the developed world. That’s what things like the Paris Agreement talks about, having this pools of money in the UN available to help the developing world adapt, to be able to go and get that help is important as well.”

“If the public is informed, that is the number one step,” he said, adding that in addition to this, the Caribbean must strive for more efficient household, including electricity efficient light bulbs, running the air conditioner less, and driving fuel efficient vehicles, and not burning less trash.

“So there are many steps that one can take at the family level to be able to help. But I think the number one thing is being educated and make sure that your leaders are taking action on climate,” he said.