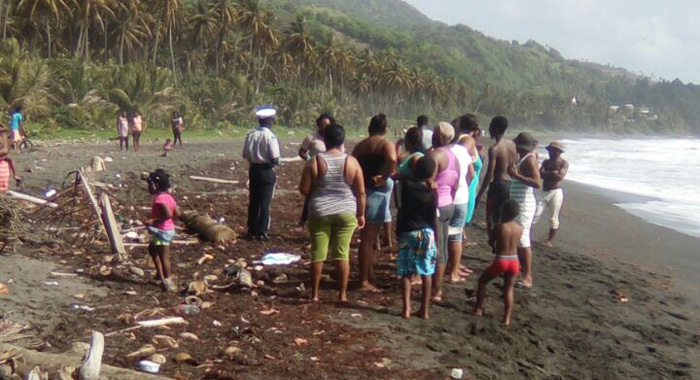 Onlookers at the scene in Sandy Bay on Tuesday.

The decomposing body that washed ashore in Sandy Bay on Tuesday has been identified as that of 16-year-old Darron “Gaza” Glasgow, whose father, Neil Cato, said that he recently began displaying signs of mental illness.

Cato told iWitness News that he last saw his son sometime around 5:10 a.m. on Sunday.

He said that Glasgow, who lives between his house and that of another resident with whom his son works, came to his house to borrow his cutlass.

Glasgow was going to attend to some animals, his father told iWitness News.

He, however, said that he told his son that he has to use the cutlass and advised his to borrow that of the man with whom he works.

Cato told iWitness News that when he saw the man around 11:30 a.m. on Sunday, the man told him that he had not seen Glasgow for the day.

Cato said he reported the matter to the police, who told him that he had to wait 48 hours before Glasgow could be considered as missing.

The father said that since his son sometimes walks along the beach when going to Owia to sell plantain chips, he walked the beach from Rabacca to Overland looking for Glasgow.

The father told iWitness News that he met a man in Rabacca who told him that he had seen Glasgow earlier that day wearing water boots.

He said he again notified the police on Monday that Glasgow was still unaccounted for.

Glasgow’s decomposing body was found washed up on the beach in Sandy Bay Tuesday morning.

Cato told iWitness News that his son had a few checkered years during his earlier teens, after he quit the Georgetown Secondary School a few years ago.

He said that his son spent two years at the Questelles Police Station, apparently serving a sentence, after he burned down a house in Sandy Bay.

Glasgow was released after authorities concluded that he was sufficiently reformed to rejoin the rest of the society.

He said that his son began talking to himself and he (Cato), therefore, took him to see a private mental health practitioner, who concluded that there was no evidence of drug use and released Glasgow.

However, last week, members of the community again became concerned about Glasgow’s behavior and his father took him to the Georgetown Hospital, where doctors referred him to the Mental Health Centre.

Glasgow, however, told his father that he did not want to go to the Mental Health Centre and promised to behave himself and asked his father to buy him a tonic.

Police are investigating and a post-mortem will be conducted to determine how the troubled teen died.