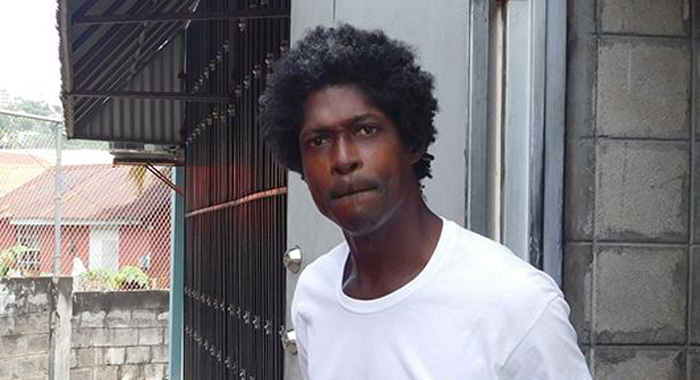 A man who, on Tuesday, told the court that he had marijuana in his possession to make wine, asked Chief Magistrate Rechanne Browne-Matthias if she had every tried the drink.

“No thank you. I am not into that at all,” the chief magistrate told Samuel James during a jovial exchange as she determined what sentence to impose upon the man, who she had commended for his honesty.

“I will trust your judgement,” Browne-Matthias further said in reference to James’ comments about the effectiveness of the drink.

During his appearance at the Serious Offences Court in Kingstown, James, a resident of Lowmans Leeward, pleaded guilty to a charge that on June 5, 2017 at Carib Mountain, he cultivated 25 marijuana plants, contrary to Section 8(2) of Drug Prevention if Misuse Act.

He also pleaded guilty to a charge that on June 5, 2017, at Lowmans Leeward, he had in his possession 1,008 grammes (2.22 pounds) of cannabis with intent to supply it to another, contrary to Section 7(3) of the same law.

The court heard that June 5, 2017, personnel from the Regional Security System (RSS) were on patrol in the Carib Mountain when they saw the defendant in a marijuana field with a cutlass in his right hand.

The RSS team continued to observe James and saw him planting cannabis.

They later approached him and told him of their observation and uprooted 25 marijuana plants.

According to the facts read in court, James told the police, “Officer, I am a musician and I plant weed to further my career.”

The police then questioned James as to whether he had anything else to declare and he told them that he had some marijuana at home in Lowmans Leeward.

A search of James’ dwelling turned up 1,008 grammes of marijuana.

James pleaded guilty to both the marijuana cultivation and possession charges when he appeared before the chief magistrate.

During mitigation, it was revealed that the 46-year-old Vincentian man, who speaks with a strong Barbadian accent, had migrated to that eastern neighbour when he was 15 years old.

He told the court that he has tried for the longest while to go to a studio to record his songs, but did not have the money to do so.

James said that while he does “legitimate farming” in the village in Lowmans, he also cultivates some marijuana in Carib Mountain, adding that the marijuana he had at his house was to make wine, while the plants he was growing in the hills was to sell and also make wine.

“Unfortunately, I was caught and I must take responsibility for my actions,” James said and asked the court to impose a fine on him and give him some time to pay.

In response to a question from the chief magistrate, James told the court that ganja wine is a drink of choice for him, adding that he prefers it to alcohol, which “causes you to do frantic things”.

He further volunteered that he makes the ganja wine at home and used to brew it in Barbados when he lived there.

The magistrate noted that James had no criminal record, but pointed out that 1,008 grammes is a sizeable amount of marijuana, adding “but cannabis” — suggesting that it is not a harder drug, such as cocaine.

“I should give you credit for your honesty,” she said, noting that James had volunteered to police the information about having marijuana at home also.

James, however, explained that he did not just volunteer the information, but responded to the questions that the police officers had asked him.

“You will not be free,” the chief magistrate told the accused man, as she continued on the point of his honesty.

“There will be sanctions imposed. You will not receive a custodial sentence. You really did a calm mitigation… So tempered,” she said, and asked if that was the effect of the ganja wine.

It was at this point that James asked the chief magistrate if she had ever tried it, a comment that some persons interpreted as a suggestion that she do so.

“That’s a sizeable reduction from a likely $2,600,” the chief magistrate commented.