Accused man who threatened to kill himself baptised in prison 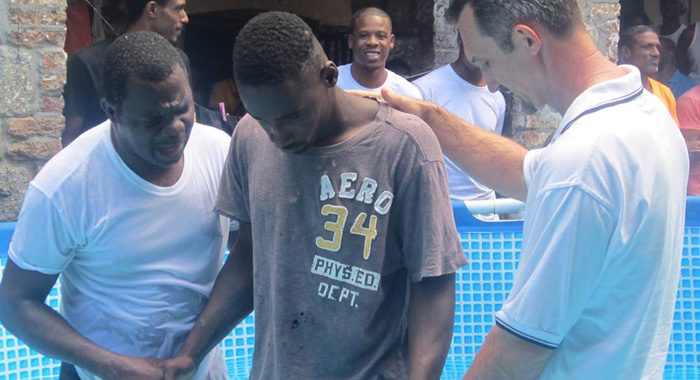 Grafton “Saddam” McDowall was among the prisoners baptised on Sunday. (Photo: Nerissa Sandy/Facebook)

A man awaiting trial on two attempted murder charges stepped forward and asked to be baptised at Her Majesty’s Prisons (HMP) in Kingstown last Sunday.

The man, Rillan Hill resident, Grafton McDowall, was among 28 inmates baptised at HMP and the Belle Isle Correctional Facility on May 28 and June 4.

Most of the prisoners made a commitment to follow Christ during a series of meetings held earlier this year and their baptisms were scheduled for May 28 and June 4.

At least two women were among the persons baptised.

On June 4, McDowall, who is also known as “Papa” and “Saddam”, made the decision and asked to be baptised.

McDowall, who is in his early 30s, is carded to return to court on July 17 for the commencement of a preliminary hearing into attempted murder and aggravated burglary charges against him.

He is charged in connection with the April 3, 2017 attack on retired head teacher Ethel King, also of Rillan Hill, who was stabbed several times at her home by an intruder.

At his arraignment before Chief Magisrate Rechanne Browne-Matthias at the Serious Offences Court, McDowall was denied bail and began to fret loudly inside the courtroom and was quickly transferred to the holding cell on the ground floor of the building.

While inside the holding cell, he began to cry and complain that his name is always the first to call whenever something happens in his village.

The man spoke about ending his life and his older sister, who was standing in the yard of the building, suggested to him a way he could do so while in prison.

McDowall is also awaiting trial in the High Court for the attempted murder of Lerna Daniel of Rillan Hill, a crime he allegedly committed on Jan. 14, 2016 and therefore, the prosecution objected to his bail on the April 2017 charge.

Speaking at Sunday’s baptismal service, Pastor Sylvester King said that man was made to lead, but “the enemy” has orchestrated a plan to disarm man and dislocate man in the scheme of God’s plan.

He said the prison ministry is to help prisoners “to regain the original intent, the original purpose for their lives”.

He said that Apostle Paul, a theologian, theorised, that any man who comes into contact with Christ becomes a new creature.

“What that means, it is not just a change of clothing but it’s a re-creation of the heart.

“If these men fully grasp their purpose, why God place them on the earth, then they will become very useful and productive citizens.”

King said this is not to say that the prisoners who decided to follow Christ would not make mistakes.

“… but we can rest assured that the recreating work of the Holy Spirit will bring about that change. So, they are going to come out a better father, a better son, a better brother, a better uncle.

“And what we are really anticipating and trusting the lord for is that [that] transformation that will be so visible so that their communities and their families will take note of the change and will say, ‘yes, they have been with Jesus,” the cleric said.

Meanwhile, Superintendent of Prisons, Brenton Charles, said that the initiative will continue.

“In fact, it is going to be the pillar on which we build our rehabilitation programme. Because of all the skills and training we can issue to the people, if we don’t give them the gospel, it’s half the work, really, and we want to have it done in total.”

He said the goal is to reduce the reoffending rate, which he said affects the wider society.

“You know if you have less crime in a country what could happen to the economy and otherwise and that is what we are working towards, really.

He said 40 per cent of the prison population are repeat offenders and the correctional authorities are working to reduce that.

“We want to bring it down to a big zero,” he said and expressed pleasure at the prisoners’ response to the initiative.

Among the persons looking on at Sunday’s event was Junior Jarvis, a former journalist who once ministered at the prisons.

Jarvis will return to court on June 20 for the commencement of a preliminary inquiry into the killing of banker Randy Lawrence. Jarvis is charged with murder in connection with the death of Lawrence, who died in hospital in Kingstown on Feb. 14, 2017, after being shot multiple times in Arnos Vale earlier that day.

The murder charge against Jarvis stands in stark contrast to comments he made some time ago in an interview inside the compound of Her Majesty’s Prison, where he had gone to minister with a missionary who had ministered to his condemned father at the same prison before his execution on Jan. 26, 1978, when Jarvis was just 5 years old.

In the undated video, which was uploaded to YouTube in Jan. 23, 2011, American missionary, Don Overstreet, spoke about how Jarvis’ father, convicted murderer, James Jarvis, was brave in the face of his execution, having accepted Jesus Christ into his life.