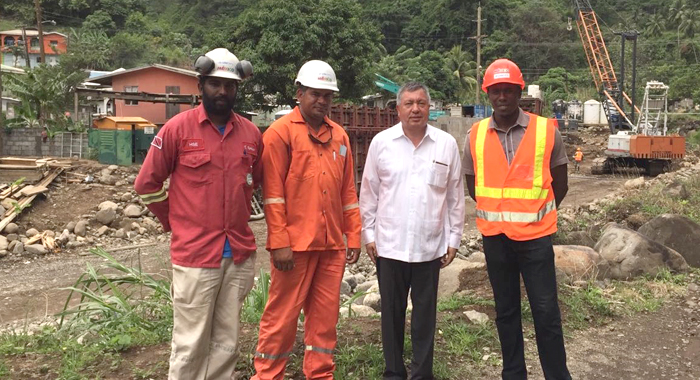 The Ambassador of Mexico to the eastern Caribbean states, Luís Manuel López Moreno, visited St. Vincent and the Grenadines on Monday.

During his visit, the ambassador met with Minister of Foreign Affairs, Sir Louis Straker, and visited the Cumberland-Spring Village Bridges Reconstruction and River Embankment Protection Project.

During the meeting with Straker, Moreno addressed some key aspects of the bilateral relations between our two countries, a press release issued by the Embassy of Mexico in St. Lucia said.

Some of the most noteworthy are the scholarships and subsidised education that Mexico is offering to Vincentian students, as well as to discuss the possibility of other cooperation projects to increase the technical and scientific capacity of the country in certain specialised areas.

The ambassador reviewed the work on the bridge project, which is financed by the Government of Mexico, through the Infrastructure Fund for Mesoamerica and the Caribbean, with a grant of US$5 million, as part of its increasing ties of friendship with the countries of the Eastern Caribbean.

The project is part of the south-south cooperation (cooperation between developing countries) that Mexico promotes with its neighbours of the Greater Caribbean as a fundamental investment in our joint development.

The visit was also intended to be an opportunity for Moreno to bid farewell to Straker and St. Vincent and the Grenadines as Moreno has been appointed Ambassador of Mexico to Guatemala, after three years serving in the Eastern Caribbean.