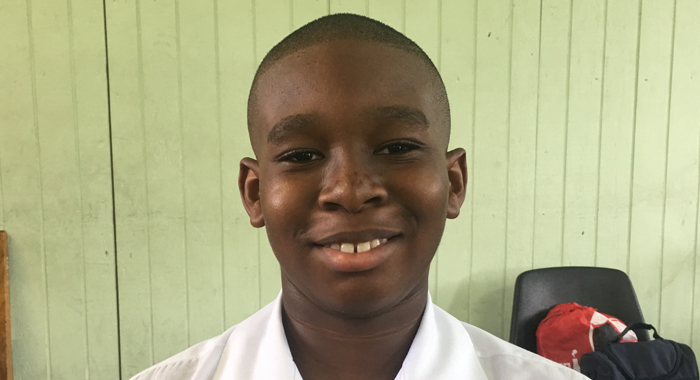 At a time when many teachers see the profession as a thankless one, St. Vincent and the Grenadines’ top performer in this year’s Caribbean Primary Exit Assessment (CPEA), got what may be considered the ultimate compliment from a teacher.

“Rosario is a student who makes you want you to stay longer in teaching. That is the easiest way of summing it up,” the Grade 6 student’s teacher, Suzette Hoyte-Holder, told iWitness News on Monday inside the classroom at Kingstown Preparatory School, where, for eight months, she helped her students prepare for the exam, which they completed on May 19.

“He’s humble and most of all, he places God first, respects others, is very disciplined and diligent. There are so many other admirable characteristics about him. You just have to love him and wish to work with him all the time,” Hoyte-Holder further said of the student.

According to the preliminary results released by the Ministry of Education on Friday, Rosario Reynaldo Matthew Browne took the top spot in this year’s CPEA, with an average of 98 per cent.

He took the final exam one day after he turned 12 on May 18 and his performance was the fulfilment of a promise he had made to himself to return the top position to his school — a feat it had failed to accomplish for some time, after years of dominance.

Browne is a rather shy 12-year-old, who, when asked about his performance, told iWitness News in his classroom, “I feel very excited.”

His strategy included watching less television, putting down the games and studying “a little bit more” for the examination, which included a school-based assessment worth 40 per cent of the 500 possible marks and an external assessment, which accounted for the remaining 60 per cent.

Browne said that he did not expect to be the top student, telling iWitness News,  “There are children who are brighter than me.”

And what he thought he lacked in natural talent, he made up for with preparation, taking extra classes in language arts, although he said he is not weak in that area.

The lad plans to attend the St. Vincent Grammar School and is considering becoming a doctor or veterinarian.

Sitting at Browne’s side, his mother, Rosalind Pinder-Browne was beaming with pride.

‘a bit’ surprised, but not surprised

She told iWitness News that she was “a bit” surprised by her son’s performance, adding, “But still [not surprised] because he was doing well right through Prep School.”

Pinder-Browne said that her son has always been at the top of his class, except for once, when he came second.

“…he cried,” she told iWitness News, adding that he came first again in Grade 2 and celebrated the accomplishment and promising himself not to lose it again.

He also said that Prep School was no longer taking the top spot in the CPEA, adding, “but I think I am going to put them back on the map”, the mother quoted her son as saying.

He was just 6 years old then.

“Since he was 6 years old, he said that, so I am not shocked but still I am shocked,” Pinder-Browne said.

Pinder-Browne is an executive officer at the Registry Department, where she has worked for over two decades.

She told iWitness News that she helped her son in whatever way she could. “Whatever I knew, I taught him. I stayed up with him helping him to do his notes, quizzing him, doing little tests at home, making tests — my own test.

“I fed him well; lots of fruits and vegetables, water,” she said, adding that he does not eat junk food.

“I would give him sometimes like a biscuit and some fruits in his bag and he would bring back the biscuit and eat the fruits. And he is telling me, ‘I want to be healthy, I want to be strong.’ So I helped him with that part and with the books.”

The mother described her son as “so disciplined”, adding that, at exam time, he would put his handheld game consoles, and his tablet computer on a table at her bedside.

“So, I have no problems. He is not rude; he is very polite. The whole school, every teacher knows he is polite and I think every teacher is rejoicing with him that he is the top student.”

Browne also plays the piano and was scheduled to take a music exam the week before CPEA.

Pinder-Browne said that her son had three weeks to practise three pieces but was not practising.

He told her once that he did not think that he could pass the music exam because he had to study for the CPEA, she said.

“I had already paid since last year a lot of money because it’s a London exam. And then he told me, ‘Go into my piggybank and take back your money. I am not going to do this [music] exam.’ So I said, ‘Yes, you have to do it. So, he took three days to learn the three pieces. So when he went back to the music teacher and played, she was so shocked,” the mother recalled.

She said Browne got back his results recently and received a merit, one level below a distinction, which one child in St. Vincent and the Grenadines scored.

Browne was also involved in tennis with the Grass Root Tennis Club, but quit the sport after the club was forced to find a new home after the owners of the lands where it was located on Murray’s Road started work on a new development there.

Pinder-Browne described herself as “a humble woman.

“I am a Christian. I am a Seventh-day Adventist believer. I take him to church. For a child month two years ago, he was selected to preach at church and he did very well. So, he is rounded. He is a rounded student.”

She advocated putting God first in one’s life, saying that her son is in the habit of praying and reading his Bible every day.

“… his main text is Philippians 4:13 – ‘I can do all things through Christ that strengthens me’,” she told iWitness News.

Pinder-Browne described her son as “very shy, … very humble,” adding that many of his schoolmates did not know who he is.

“He is very, very quiet, very humble. He is [a] role model,” she said, adding that when he was placed in his stream at the school, a student from another class told him, “I think you are going to be my role model.”

Pinder-Browne added: “And the child didn’t really know him. And I think it’s because of his behaviour.

“Even in the neighbourhood, all the neighbours came out when they heard that he was the top student,” said Pinder-Browne, who lives in Ratho Mill.
She offered this advice for parents of children who have to take important exams.

“You need to support your children. Support them all the way. Pray with them, because the devil is busy. … Help them in whatever way you can.”

She said that if a parent is not accomplished academically but have the resources, they should pay someone to help their children.

“Because everybody wants the best for their children.”

For his part, Browne had this advice for other children: “Don’t make people bring you down because nothing is impossible with God.”

It is not the first time that teacher Hoyte-Holder is associated with a student who has done very well at the CPEA.

She was a teacher at Questelles Government School in 2014 when 10-year-old Laron Jones topped the CPEA.

Hoyte-Holder had taught Jones in Grade 4, and when he placed first, her daughter placed fourth for girls.

“So, it (students performing well) is something I’ve been used to.”

But to have taught the top performer, Hoyte-Holder told iWitness News she was “extremely elated; really, really happy”.

However, preparing students of CPEA can cause teachers to feel a lot of pressure.

“I think sometimes too much is left for Grade 6. So, all teachers have to get on board and work from kindergarten all the way up,” Hoyte-Holder told iWitness News.

“It is believed that CPEA is for Grade 6 alone but it is for the whole school, the entire school, from kindergarten all the way up. So when more work is done in the lower grades, children are not so stressed; neither are the teachers.”

She advises students preparing for CPEA to put God first in everything because through him, all things are possible.

“Second, you have to be determined and be prepared to work hard and constantly. There are times you have to make sacrifices, give up some of the time spent on social media and the internet, gadgets and so on and really work hard.  Be disciplined, do your homework, respect your teachers, work along with others.”

To parents of students preparing for CPEA, Hoyte-Holder had this to say:

“Parents, we really need you on board, we don’t want to see you only when it is CPEA time or for results. We need you all the time. So, give us your support, do not bash us. We need you as much as you need us. For the teacher, we have to continue to work along. It is a daunting task, yes, but we are citizens of St. Vincent, we want our country to do well, we want our children to do well, and we will be remembered by what we give to these children in the classroom.”