A response to the US ambassador’s offensive article about Venezuela 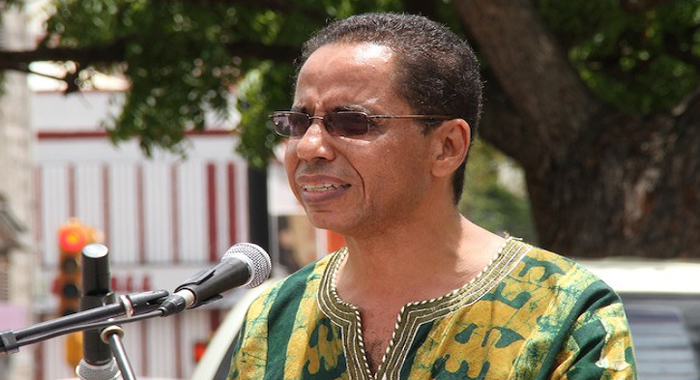 After reading the article by Ms Linda Taglialatela (the United States Ambassador to Barbados and the Eastern Caribbean) that was published in several of the newspapers of Barbados and the Eastern Caribbean on Tuesday 20th June 2017 under the headline “We Must Defend Venezuela’s Democracy” or some such title, it occurred to me that only an ambassador representing the administration of the egotistical Donald Trump would have the effrontery to believe that she is entitled to attempt to circumvent the national leadership of our countries by arrogating to herself the right to utilize our national news media to speak directly to the masses of our people and to enlist them in her (and her country’s) unholy “regime change” crusade against the duly constituted and friendly government of our fellow Caribbean state of Venezuela !

Ensconced as she appears to be in an exaggerated sense of her own importance and authority over our people, Ms Taglialatela ends her article by admonishing the people of Barbados and the Eastern Caribbean as follows: “I urge you to let your leaders know that you stand shoulder to shoulder with the Venezuelan people as they fight for their fundamental human rights.”

So, apparently, Ms Taglialatela believes that she knows better than the prime ministers and other political leaders of our countries, and that it is up to her to inform and instruct, what she no doubt perceives to be, the ignorant and uninformed people of the Caribbean.

Indeed, Ms Taglialatela seems to think that she knows the situation in Venezuela even better than Ms Ines Esparragoza, the mother of the late Orlando Figuera — the 21-year-old Afro-Venezuelan who was brutally beaten by a crowd of white opposition supporters; stabbed six times; doused with gasoline; and set on fire. Orlando Figuera was burnt to death simply because he was black and was a supporter of the socialist party of Chavez and Maduro. His grieving mother publicly stated that the opposition was directly responsible for his death! Does Ms Taglialatela really think that she knows better than the mother of Orlando Figuera?

Well I have news for Ms Taglialatela!

The people of Barbados and the other Eastern Caribbean islands do not need any instruction from her. Our people are well aware that the defining feature of the history of the entire Latin American and Caribbean region is that for hundreds of years the masses of indigenous, mestizo, and black people were exploited and kept in an impoverished state by local white elites acting in partnership with the economic oligarchy of the metropolitan countries of Europe and North America.

Our people are aware that just as this social pattern applied to Barbados and the other Eastern Caribbean territories that it applied to Venezuela as well.

The masses of black and working-class people in Barbados and the Eastern Caribbean only began to experience significant social and economic upliftment when– in the 1950’s– representatives of the black masses finally got their hands on the instruments of government and used those instruments to share the national resources more equally and to uplift the people.

And so it was with Venezuela as well! It was only with the coming to power of President Hugo Chavez in 1999 that, for the first time, Venezuela became possessed of a president and a governmental administration that were deeply connected to the interests of indigenous, mestizo, black and impoverished Venezuelans.

Ever since oil was discovered in Venezuela in the 1920’s, big and wealthy American corporations had latched on to Venezuela and — in partnership with the white Venezuelan elite — had plundered and selfishly consigned the country’s oil revenue to themselves, and to the exclusion of the black, mestizo, indigenous and working-class masses of the country.

It was Chavez and his United Socialist Party that effectively snatched away Venezuela’s tremendous oil resources from the hands of the US multinationals and the local white elite, and began to direct the oil revenue towards education, health, housing and other forms of social development for the impoverished masses.

And so, our people know instinctively that the political and social battle that is now taking place in Venezuela is centred on an attempt by the local elite and their US backers to retake the Government and the oil industry that the Government now owns and controls.

This is what you and the Trump administration are really interested in Ms Taglialatela — not in the welfare of the ordinary people of Venezuela.

Indeed, the government that you serve, Ms Taglialatela, has never been interested in the welfare of the ordinary people of Latin America or the Caribbean! It is well known, for example, that the US Government has a reputation for supporting any dictator who is willing to toe an American line and to permit American economic interests to flourish — Papa Doc Duvalier in Haiti, Somoza in Nicaragua, Trujillo in the Dominican Republic, Batista in Cuba, Pinochet in Chile, Marcos Perez Jimenez in Venezuela, Porfirio Diaz in Mexico, and a slew of brutal military strongmen in Guatemala, Brazil, Argentina, Honduras, El Salvador and Uruguay at various times between the 1960’s and the 1990’s.

Finally, Ms Taglialatela, you must not believe that our people are so ignorant and uninformed about the situation in Venezuela that you can get away with the parroting of half truths and distortions.

You claim that the Maduro government has “undermined” the opposition controlled national assembly on the basis of “vague, unproven claims of electoral fraud allegedly committed by three legislators”. Surely you must know that this is a gross distortion. Why didn’t you acknowledge that the Supreme Court of Venezuela ruled that the claims of electoral fraud had been proven, and as a result had gone on to instruct the national assembly not to swear in the three legislators in question, but that the national assembly openly and defiantly flouted the ruling of the Supreme Court and admitted the three disqualified legislators?

You also claimed that the Supreme Court of Venezuela has stripped the national assembly of all legislative authority. Here again, you must know that this is a half-truth. Why didn’t you acknowledge that under the Constitution of Venezuela the Supreme Court has the legal power (and the responsibility) to temporarily take over the functions of any organ of the state that is failing to carry out its constitutional responsibilities, and that the supreme court took control of the functions of the national assembly for a mere ONE DAY before rescinding the decision to do so!

Why the need, Ms Taglialatela, for all the half-truths and distortions? Why not inform the Barbadian and Caribbean people that no nation on the face of this earth has had as many internationally approved elections than Venezuela has had over the past 18 years, under the presidencies of Hugo Chavez and Nicolas Maduro?

Why not inform our people that the United Socialist Party of Venezuela (PSUV) has won the vast majority of these elections, but that on every occasion that it has lost an election, it has respected and upheld the result? Indeed, isn’t this why the opposition M.U.D. party is now controlling the majority of seats in the national assembly?

The reality is that Nicolas Maduro won the presidential election in 2013 fair and square, and as a result he and his administration are entitled to and WILL remain in office until the latter part of the year 2018, and hopefully — if it be the electoral will of the people — way beyond that date as well. And no amount of orchestrated (and paid for by wealthy opposition politicians) violent street protests is going to change that!

No, Ms Taglialatela, you have overstepped your bounds and trampled on our traditional island courtesy and hospitality. Let this be the first and last time that you do so.