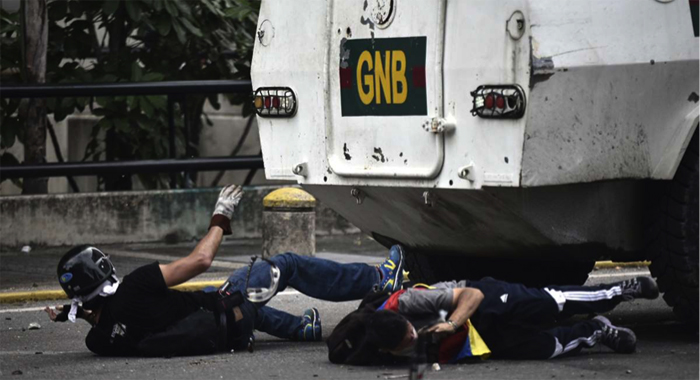 The situation in Venezuela is dire. The country is sinking deeper into chaos to the point that it resembles a country in a civil war. From April 1, thousands have been arrested, hundreds injured and 77 dead. The city is beset with violence. The last reported murder rate, in 2014, was equivalent to the civilian casualty rate in 2004 in Iraq. Its economy is estimated in 2016 to have shrunk by 10 percent. The inflation rate is estimated (2016) to be as high as 808 per cent, rendering its currency almost worthless. Once Latin America’s richest, the country is now on the brink of collapse.

Venezuela has the world’s largest proven oil reserves, but, in spite of that — or because of it –“food has grown so scarce that three in four citizens reported involuntary weight loss, averaging an alarming 19 pounds a year.” Poverty has gone from 48% in 2014 to 82% in 2016. Extreme poverty from 24% to 52% in the same period. But thanks to Venezuela’s Petro-Diplomacy, we are recipients of their largesse so those obscene numbers are a matter for the Venezuelan people. During the nine years of airport construction, heavily financed by the people of Venezuela, they were struggling for economic survival. So, thank you for your generosity but screw you and your circumstances. Your problem is not ours. Nicolas Maduro Moros, must not, not be criticized, nor obstructed. That is virtually what the Organization of American States (OAS) said when they failed to reach an agreement at a recent meeting on a resolution criticizing the government of Venezuela. Last month, Maduro said that he might seek a new constitution. To a tinpot dictator, “might” is a whim; an arbitrary exercise of power. It will be as good as a done deal.

From here, we know about the chaos and the spiraling chaotic misfortunes of the people over there. Aye, but we have bread in our cupboards and toilet paper in our bathrooms. I know it as I write this, knowing full well that even if it makes our Prime Minister uncomfortable he would not have his people do to me what the wretched tyrant of a bus driver would have his people do to me if I was writing this in his country.

This Is What It Looks Like On The Outside. Circa May 12.

This Is What It Looks Like On The Inside. Bread Shelves In Boca De Uchire. Circa May 12

People Are Hungry But Venezuela’s Farmers Cannot Feed Them. Here’s Why. May 22

Soon after the failed OAS meeting, our Prime Minister wrote to his colleagues. There are three views, which he raised in that letter that I consider irreconcilable and/or incongruous. Here they are; not in the order they came.

The Prime Minister raised the point of “Venezuela’s abundant material resources.” So, not counting Argyle, where is this vast abundance of great wealth Comrade? Where has it gone? Where is it going? What good is it doing for the people of Venezuela? Don’t tell me, tell them. Tell them to stop their needless bellyaching because they rich like salt. Tell them to go home peaceable — and starve. Tell them to live a life of servitude under the despot and his circle of capos.

Then he said that, “St. Vincent and the Grenadines sees no need to change our Declaration one iota. The circumstances in Venezuela are precisely the same today (June 20) as they were on May 29, 2017.” Bought and paid for. Look at the May pictures that I have chosen and placed randomly. Look at the dates. Observe the mayhem. Our Prime Minister is saying it was that way in May and it has not changed in June so let the carnage continue. And CARICOM and the OAS must turn their backs, too. I am appalled at the brass fronted impudence. One would have thought that the way Ralph came to power he would have been a little sympathetic and more understanding of the plight of the people of Venezuela.   Ah, but for Petro-Diplomacy. Nicolas Maduro, carry on, you have your comrade’s unholy blessings.

In a case like Venezuela’s, no change in the situation makes it a fundamental imperative, a moral obligation, a social and political responsibility for change. The Venezuelan protests has been going on since 2014, yet, the space cadet is blaming just-arrived Donald Trump. The man is seriously unhinged. It was probably Chavez in the form of a little bird, again, who told him that anachronistic gem.

Lastly, the Prime Minister opened his letter complimenting his colleagues for acting “wisely” and “maturely” on “the situation in Venezuela,” in that they promoted “non-interference and non-intervention”. And later, he capped it with, “Venezuelans must be allowed to resolve by themselves their intense political conflicts or challenges, without unwarranted meddling.” That’s close to sophistry.

The problem is unsolvable because Maduro is the problem. There is not going to be a physician heal thyself with a tyrant who’s in power. But, that aside, when did Ralph’s stand on “unwarranted meddling” kick in? I ask because in 2009, Meddlesome Matty, the Prime Minister of St. Vincent and the Grenadines, took it upon his Vincentian self to travel to St. Kitts to advocate which political party should form the government to govern the people of that country. He and his considerable, persuasive prime ministerial clout found himself in St. Kitts campaigning; giving “solidarity and support” for Denzil Douglas’s St. Kitts-Nevis Labour Party over Lindsay Grant’s People Action Movement. How does that strike you for unwarranted meddling? Like the Venezuelan people, St. Kitts and Nevis people should shut their face listen to Ralph.

With Petro-Caribe trudging along and the airport operating, we got wat we want, so, CARICOM, don’t meddle with the tinpot and his government. Who says Petro-Diplomacy doesn’t work? Remind me again: In 2008, how did US Ambassador to Barbados and the Eastern Caribbean, Mary Martin Ourisman, describe our Prime Minister?

Plenty But Not Enough To Defeat Petro-Diplomacy. April 8

Commitment. April 19 (Reminds Me Of Ralph And His Roadblock. Least We Forget.)

This Is What Commitment Can Get You. May 3

CARICOM Does Not Walk In Her Shoes (If She Has). April 15

Come And Get It. April 8

Making Sure. The Back Up Lights Are On. May 3

One reply on “Meddlesome Matty reverses on ‘unwarranted meddling’”