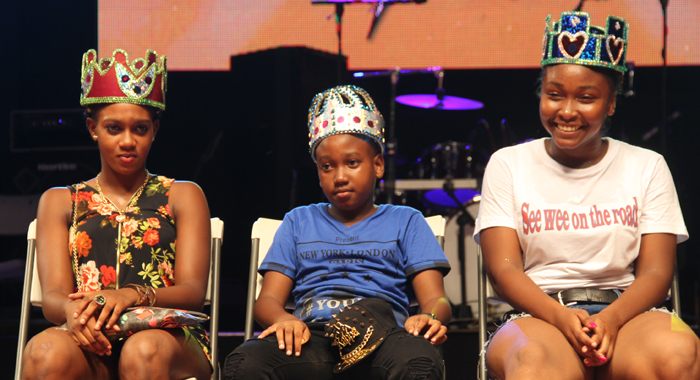 For a second consecutive year, siblings have won two of the three crowns up for grabs at the Junior Calypso and Soca competition.

Kristian “Lil Kris” Christopher, a 9-year-old Grade 4 student of the Layou Government School, completed a hat trick when he won the Primary School segment of the Junior Calypso competition at Victoria Park on Tuesday.

Lil Kris’ song, “Celebrating 40 Years”, was a tribute to the 40th anniversary of Vincy Mas changing from a pre-Lenten to summer festival.

He will reign alongside his older sister, Kristiana “Singing Kristy” Christopher, of the Thomas Saunders Secondary School, who won that category of the competition with her song, “Fragmentation” — to take her seventh crown.

Singing Kristy, who is 15 and in Form 3, won ahead of Damian “Boney Man” Noel St. Martin’s Secondary, who many patrons felt was a very strong contender for the crown with his spirited and entertaining rendition of “De Man Wid D Plan”, a song about politics and the development of St. Vincent and the Grenadines.

And, a first-time artiste, M’riah “Young Saiah” Robertson, of West St. George Secondary      School, won the soca category of the competition with her song, “Carnival Hot”.

Among those who she trounced was the defending monarch, Singing Kristy, whose “Super Hero” only managed to carve out a second place spot for her, while

Eleven artistes vied for the primary school crown, while nine each contended for the secondary school and soca crowns, respectively.

“I am very surprised, I didn’t expect to win because over the weekend, I was hoarse and I just sang my best when I went on stage,” Young Saiah told iWitness News shortly after she was crowned.

She said she has been singing since she was a child, adding that she was introduced ro singing by her mother, who used to take her to karaoke.

Young Saiah, however, said it was the first time that she was participating in Junior Soca, adding that she decided in May to participate because she was inspired by the artistes like Fire Empress and Skinny Fabulous.

“I want to be like them when I grow up,” said the 13-year-old Form 2 student, who is from Sion Hill.

No stranger to winning, Lil Kris told iWitness News that he felt great about winning another crown, his third in a row.

Singing Kristy was overjoyed by her victory with her song, which also took her to the Semi-finals of the national competition.

She said she felt really excited that she was winning a second time alongside her younger brother.

With her victory, Singing Kristy had won the right to represent St. Vincent and the Grenadines at a regional junior calypso competition in Barbados. She said she is looking forward to singing her winning song at that competition.