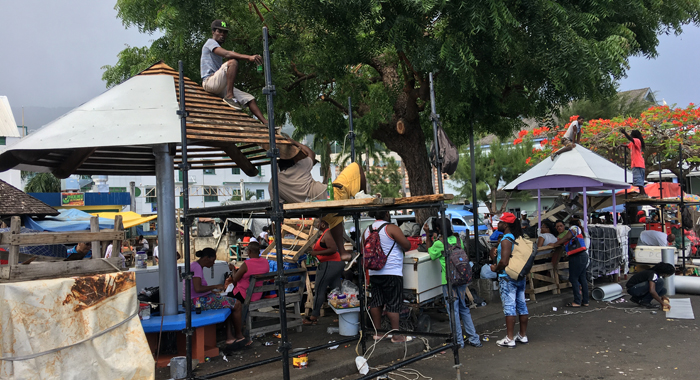 After years of neglect and dilapidation, Little Tokyo, the main bus terminal in Kingstown, is getting a facelift for Vincy Mas 2017 — even if just a very cosmetic one.

This past week, workers have been busy repairing the roof of the washroom at the bus terminal, which was built some three decades ago as a gift from the Japanese government, hence its name.

The restroom has been rundown for years with the roof in such a state of disrepair that it was possible to see the sky from inside, through the roof.

But while the repairs to the restroom are substantial, that is not the case with the roofs of the 20 or so shops that are part of the bus terminal.

Over the years, as the roofs of the shops deteriorated further, their tenants have used old pieces of zinc sheeting and even vinyl carpet to try to keep the elements out.

Over the past week, workers have been busy putting pieces of galvanise on one side of the shops and painting them in silver paint.

The work on the roof of the shops and the manner in which it is being done suggests that the intention is to hide the decay at the venue, where carnival bands will be judged during next week’s Mardi Gras.

Repairs were also being done to the roof of some of the sheds under which commuters seek shelter from the elements while awaiting transportation.

As part of the changes to mark the 40th anniversary of Vincy Mas, the Carnival Development Corporation has decided to move the judging of Mardi Gras, which attracts a small number of spectators at Victoria Park to the streets of Kingstown.

Indications are that masqueraders will pass through Little Tokyo, where one element of the judging will be done.

10 replies on “Little Tokyo gets cosmetic facelift for Carnival”