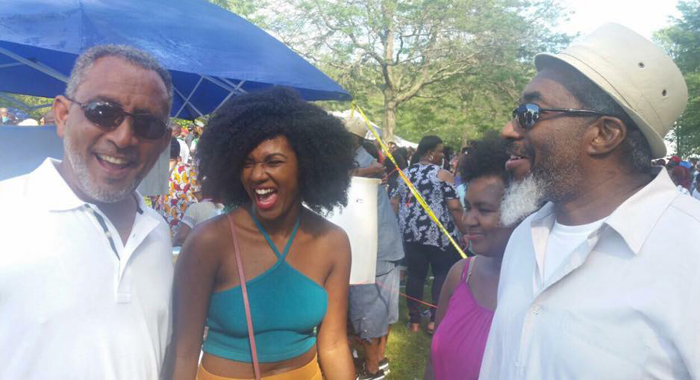 Leader of the Opposition, Godwin Friday says he is disappointed that he was not allowed or invited to address the annual “Vincy Unity Picnic” in Canada on Saturday.

Between 10,000 and 15,000 persons are said to attend the event annually, making it one of the largest gatherings of Vincentians in the diaspora.

Gideon Exeter, president of the St. Vincent and the Grenadines Association of Toronto, had asked the Sandra Bobb-headed committee that organised this year’s event to allow Friday to address the gathering.

The committee decided against it and the event heard an address from Sen. Luke Browne, who presented the Ralph Gonsalves government in Kingstown, in keeping with what Bobb said is a policy of inviting the government to send a representative to address the event.

“Well, naturally, I was disappointed that I wasn’t allowed to, or invited to address the crowd that was there because it was a large group of Vincentians and other Caribbean people and I thought it would be good for them to hear from me as the Leader of the Opposition. More so, from my point of view, I was looking forward to greeting them.”

Friday, who lived in Canada for years before being elected as Member of Parliament for the Northern Grenadines in 2001, became Leader of the Opposition last November and was attending the picnic for the first time in that capacity.

He said when the request “was apparently made or information was sought” as to whether he would be permitted to say a few words to the audience, the person who made the request was told no.

“I have been trying to find out why and nobody has given me any explanation as to why that was so, other than to say that the decision had been made,” the opposition leader told iWitness News.

Friday said he, however, felt welcomed at the event, held at Thousand Islands, Ontario.

“The kind of greeting and reception that I received from the people on the grounds, was phenomenal. I was very pleased with that and I thought it would have been nice, it being a unity picnic, that if you had a representative from the government, I am also a representative of the people of St. Vincent and the Grenadines, being the Leader of the Opposition, that they would invite me to say something.

“But it didn’t happen. It didn’t dampen my spirits because I went around and I met a lot of people. I took a lot of photographs and greeted a lot of people of all stripes. Politics really didn’t come into it.”

Friday said he has been to the picnic before when he lived in Canada and thought it important to attend the major Vincentian event as opposition leader.

“I thought it important to show to the diaspora that we understand the important role they play and we appreciate the efforts of the organisers who have put this thing together over the years, since in the mid 1980s and to see what it has grown to.”

Friday shied away from saying that politics played a role in the decision not to allow him to speak, as some persons have claimed.

“I’m not going to speculate as to the reasons because I don’t know who made the decision other than the committee said that was the case,” he told iWitness News, but reiterated that the decision was “very disappointing”.

“And many people have said that it gives the impression — and it’s a reasonable position to adopt — that it was not being even handed in the sense that you have a representative of the government, a senator, who came here — invited apparently, spoke, representing the position of government.”

Friday said he went to the event “on my own steam” saying that friends invited him and encouraged him to attend.

He said that he too wanted to attend but because of the election petitions that came up for hearing in court in Kingstown last Wednesday he also wanted to be in St. Vincent for that.

“But as to why it was done, I haven’t been given a satisfactory explanation yet as to why they were not going to allow me to address the audience of Vincentian who were at a unity picnic. I would have been such a good symbol of unity in the country to say, listen, we have people of all political stripes here, this event is a non-political event, here I come as leader of the opposition and I come here on my own, I came to meet and greet people, it would have been good to say let me address the audience.

“But as I say, it did not dampen my spirits. I had a wonderful time. I met a lot of people. People made me feel very welcome and I am very encouraged by that and would really try to make this picnic every year.

When iWitness News contacted Sandra Bobb, chair of the organising committee, via telephone Sunday evening, she sounded hoarse and said she had lost her voice at the event the previous day.

She told us via WhatsApp messages that her committee “did not receive an official request from the Leader of the Opposition” to address the gathering.

She outlined what she said was the policy of the committee.

When asked if there was a request sent to the Committee asking that Friday be allowed to address the gathering, Bobb referred to her earlier statement about the policy.

“The policy is as stated previously, and has nothing to do with political parties.  We request the Government to send a representative.”

Bobb did not respond to other questions from iWitness News relating to the development.

However, Exeter told iWitness News separately via telephone Sunday night that he made what he considers an official request to the committee asking that Friday be allowed to address the picnic.

He that his younger brother, Ben Exeter –a candidate for Friday’s New Democratic Party — asked him to request of the committee that Friday be allowed to address the event.

Gideon said that Ben called him on Wednesday and confirmed that Friday would attend the picnic.

The picnic is organised by a committee composed of three representatives each from the SVG Associations of Toronto, Ontario and Montreal.

Gideon told iWitness News that he told his brother that he is not a member of the committee but would make the request on Friday’s behalf.

“And I did that,” Exeter told iWitness News.

Exeter said he said he sent an email to Bobb who later responded.

Regarding Bobb’s statement that the committee did not receive an official request from the Leader of the Opposition, Exeter said, “That might have a lot of different interpretations.

“All I can add to that is that I do not think that Mr. Friday made the request through any other person but me. So I don’t know what ‘official’ in her and your reference here would mean.

“All I can say I do not know what the interpretation is at this point. To be honest with you, I would consider that a formal request.”

Exeter said he received an email response from Bobb saying that it was policy of the Unity Picnic Committee to invite the government to speak and not the opposition.

He said he was never aware of such a policy before, having never sat on the committee.

Exeter said he did not communicate the committee’s response to Friday until he saw him on Saturday.

“By the time I got the information, I didn’t want to flare anything up. I just thought that things would have worked themselves out and at the time while Mr. Friday was present, common sense may have prevailed and he would have been allowed to speak. That was my hope,” Exeter told iWitness News.

He told iWitness News that the picnic turned out to be “the usual unity of Vincentians and other Caribbean nationals who come there to enjoy what I would refer to, in terms of St. Vincent and the Caribbean, as a beach picnic”.

He said that while the annual attendance is around 10,000 to 15,000 people, he does not think that such a large crowd attended this year.

“But it was friendly, incident-free… Everybody who I interacted with seemed to have enjoyed themselves.”

Exeter said that the fact that Friday was not allowed to speak at the event did not cast a shadow on it.

“Mr. Friday worked the floor and or the grounds very well. He moved around, interacted with quite a number of people. I don’t think too many people there knew about whether or not he made a request or was not allowed to speak.”

He said a small percentage of the persons who attended the event would gather in the area where the formalities take place.

“Regardless to who the speaker is, I don’t think 90 per cent of them pay attention to what’s going on stage. Mr. Friday interacted with people across the ground. I don’t think him not being allowed to speak had much of an impact on people,” Exeter told iWitness News.

“I understand the implications, I understand the political thing about him not speaking, but his presence there, the way he interacted with people, I think his visit was worth it, that he was able to interact with people, albeit that he did not get to address them from the official podium,” he said.