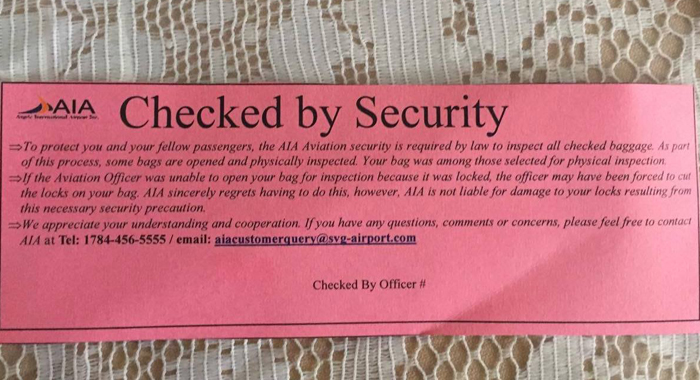 One of two tags that the passenger found in her luggage.

The Argyle International Airport (AIA), on Monday, said it will launch an investigation after a report by a passenger that a number of items were missing from her luggage after a flight to Canada, via Bridgetown.

The investigation has been launched amidst multiple claims by passengers using the airport, which opened in February, that a number of items have gone missing from their luggage after flying out of St. Vincent via the airport.Keisha Robinson, a Vincentian living in Canada for 12 years, said that her wedding ring, EC$200 in cash, nine panties were among the items missing from her bag.

The other items were a pair of Nike shoes, two pairs of jeans, one dress, one purse, a pair of sandals, a pair of flats, and four bottles of Sunset Rum.

In an email sent to AIA on Sunday, Keisha Robinson, a Vincentian living in Canada, said that she took a flight from AIA to Barbados on Friday, July 14, and from Barbados to Toronto.

She was returning to Canada after coming home for the first time in 12 years.

Robinson, a law student in Toronto, said that she left St. Vincent on LIAT flight LI371, the first flight of the day. From Barbados, she flew on Air Canada flight AC 1715 at 2:35 p.m. to Toronto.

“Upon my arrival to Barbados I had to check my luggage onto air Canada and was in such a hurry I didn’t notice my bags until I got to Toronto. Where my bags lock were taken off and tamped with. Which lead to missing items that was stolen from my check luggage on a plane, which was supposed to secure passengers items. I notice a document in my check luggage, which stated it, was inspected by SVG inspected without my permission or in my present (sic),” Robinson said in the email.

She said she understands that “if I had any illegal substances in my bag you would check my bag with my present (sic) and removed it. Which I never had any illegal substances or brought anything am very disappointed and not happy with this matter and would like some form of justice. As these items that was taken from me was very precious as my wedding band amount (sic) those items.”

Robinson said she wished to have the items returned to her as soon “as possible as this is really unacceptable”.

In an email response on Monday, Arlette Miller, customer service officer at AIA, apologised to Robinson “for the discomfort which you experienced,” adding, “It was not our intention to do so as your ultimate comfort and passenger experience are our priority.”

Miller said an investigation will be launched immediately into Robinson’s claim of the removal of the wedding band, Nike shoes two pairs of jeans, a

“Please be assured that we will follow up as soon as the investigation is completed,” Miller said.

He pointed noted that the AIA’s Baggage Screening Policy released to the press on April 26, 2017 reminds all passengers that prohibited items when travelling include alcoholic beverages 70% by volume (140 proof).

“Sunset alcohol is 84.5% by volume.  The Press release also explains that Aviation Security is required by law to screen all checked luggage and may also shed additional light as to why your bag may have been one selected for physical search.

“Once again, please accept our sincere apology for your discomfort, and we hope that you would not let this deter you from visiting your father here in SVG,” Miller said.