Mother and son on weed charge 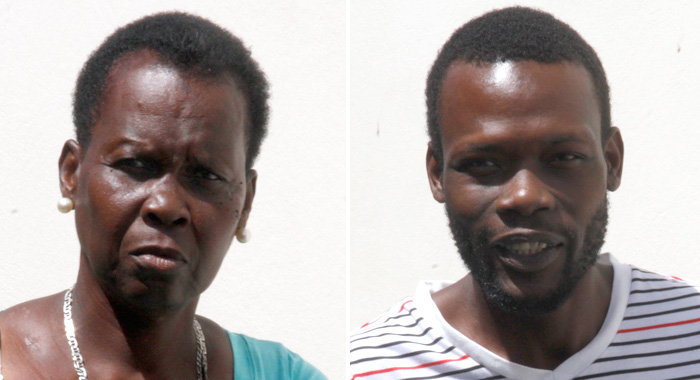 An Ottley Hall woman and her son were, on Monday, brought before the court on two counts of marijuana possession.

Evelyn Moore and her son, Kamal Moore, were each charged that on July 15, 2017 at Ottley Hall, they had in their possession of 199 grammes of marijuana with intent to supply to another.

They were also charged with possession of 99 grammes of the drug on the same date and at the same place.

They both pleaded guilty when Chief Magistrate Rechanne Browne-Matthias read the charges to them at the Serious Offences Court in Kingstown.

The court heard that on the date in question, members of the Special Patrol Unit went to Ms Moore’s house in pursuit of her son.

They had a warrant granting them permission to search for firearms and ammunition.

The police squad, led by Station Sergeant of Police Duane Bailey, knocked on the door and Ms Moore peeped through a window.
Bailey identified himself and the group of police officers and asked Ms Moore for her son.

She told the police he was not at home.

The warrant was shown and read to her and she refused to open the door when told to do so.

Ms Moore went into a room and threw something outside of a window then came back an invited the police officer to enter the house.

One police officer found some loose material resembling cannabis in Ms Moore’s room and when she was cautioned, she told the police officers, “Officer, is weed. Is me son own.”

On July 16, 2017 Mr. Moore told police at the Criminal Investigation Department in Kingstown that the drug belongs to him.

Regarding the drug that was thrown out of the window, Ms Moore said nothing when cautioned by police and was taken to the CID, where she was charged.

Senior Prosecutor Adolphus Delplesche withdrew the charges against Ms Moore after both accused accepted the facts as presented by the Crown.

“I give you a chance,” Delplesche told the woman.

In mitigation, defence counsel Grant Connell told the court that Mr. Moore is a 31-year-old father of one child with no previous convictions.

He said his client was extremely remorseful, adding that the drug found in the “privacy of his home” was for personal use.

He asked the court to show “great leniency” and impose a fine, giving his client some time to pay.

The magistrate fined Mr. Moore EC$400 for the larger amount, ordering him to pay EC$200 forthwith and the balance by July 31 or spend one month in jail.

He was fined EC$250 for the smaller amount.

2 replies on “Mother and son on weed charge”