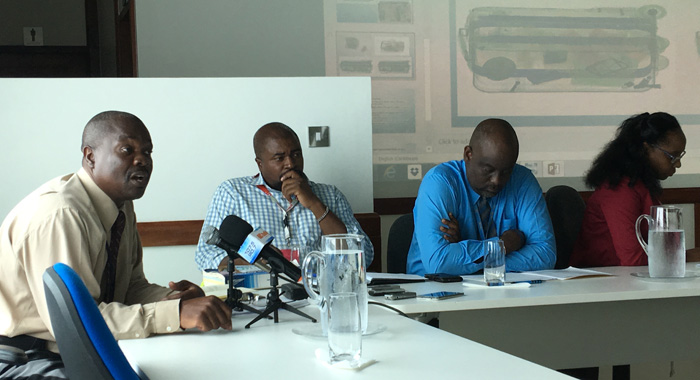 AIA security chief, Keith Miller, left, speaks to the media (not seen) on Monday as other AIA officials look on. (iWN photo)

The chief of security at the Argyle International Airport (AIA) has sought to assure the media that the process through which checked bags are screened is systematic and transparent.

“There are facilities in place to see what happens,” Keith Miller, a former commissioner of police told media workers on Monday during a “walk-through” of the airport, which began operating on Feb. 14.

The event was intended to “highlight the security and safety procedures that are conducted on a daily basis”.

The media sensitisation event took place against the backdrop of what the airport said was “complaints relating to missing luggage items over the last couple of weeks”.

The airport organised the media tour “in an effort to educate the public on matters relating to prohibited travelling items, security procedures, etc.”.

Miller said that checked bags will enter the baggage hold area where they go through x-ray machines.

If there is no reason for security to stop and manually inspect the bags, they continue along their way, where they are stored by security personnel until they are loaded onto aircraft.

“That bag will be pulled, all records will be made as to why that bag is pulled and what is done with that bag,” Miller said.

He said a “systematic method of manual search will take place and the screener will go to that area where the x-ray operator directs him.

“However, I must let you know that we check for everything, because that thing we see may be a distraction. So we are not taking any chances, hence the reason why we have to implement that systematic method.

“So if what was being looked for is a prohibited item, that item will be removed from the bag and a record of that made. And, in most cases, in fact, what we have seen so far, the prohibited item that is not allowed to go across to the aircraft is the Sunset Strong Rum—70% by volume or 140% proof.”

The security chief said that after a bag is examined and prohibited items removed, the bag moves to the baggage reconciliation point, “where we must ensure that bags match passenger going on to the aircraft.”

He said the bags are loaded on carts that are guarded while they await transportation to the aircraft.

He said only screening officers and airline agents are allowed in the area during the security screening of bag.

“Not even our maintenance personnel if they are doing routine checks, are allowed there.”

He said that in the event of an emergency, maintenance personnel will be allowed there under certain conditions, “where we will have to evoke more security personnel and escort them across there.

“This is how serious we take the issue of our passenger safety from a standpoint of a bag going across to the aircraft.”

Miller said that security officers escort bags when they are being taken across the ramp to the aircraft.

These security agents take up positions around the aircraft to ensure the bags are protected even while being loaded onto the aircraft.

“There are also security personnel in strategic positions to ensure that only persons who have any legitimate right to go across to the aircraft during that process go across there.

“A note will be made of the person’s name, their responsibility, among other things.

“This is how tight, this is how strong a security regime we have in place to ensure your safety, to ensure everyone’s safety when they are travelling on an aircraft.”

Miller said that AIA was doing a comparison with what happens around the world and they compared themselves with an airport in Los Angeles.

Meanwhile, chief executive officer at the AIA, Hadley Bourne, said that the screening really starts at the point when the traveller’s bag is packed.

He said the second stage is at the airline check-in counter with the verbal declaration that the travellers give the agent regarding what is in their bags.

Bourne said these considerations are the same, whether the check-in is manual or automated.