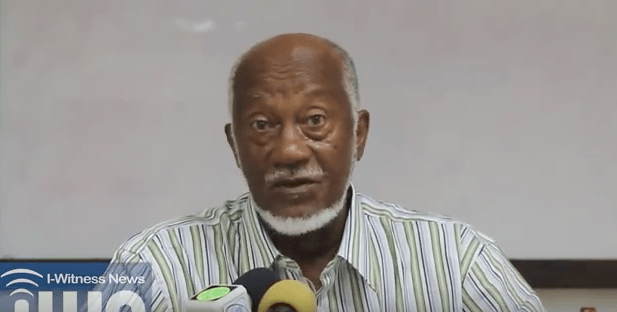 St. Vincent and the Grenadines has lost one of its most humble but persistent advocates for social justice.

Allen, who was in his 70s, died Friday night sometime after undergoing a medical procedure in hospital.

He also had other medical complications, including heart disease, high blood pressures and diabetes, a source close to him told iWitness News on Saturday, but said when he was last seen, “he looked good, we talked, and he was looking forward to going home”.

Tributes have begun to pour in via social media for Allen, who was chair of the non-partisan pressure group, the People’s Movement for Change.

Speaker of the House of Assembly, Jomo Thomas, who is also a charter member of the PMC, said in a Facebook post Friday night that was “deeply saddened by the passing of brother Oscar Allen.

“His demise leaves a gaping hole in the local field of social criticism. He was a firm defender of the interest of all of our people and a harsh critic of injustice.

The Italian revolutionary thinker, Antonio Gramsci, said that the working people need to develop a cadre of working class intellectuals to champion and defend its interest. Oscar was truly an intellectual of the people,” Thomas said.

“On these saddest of times, the best homage we can pay to Oscar’s life and memory is to live like him and be like him.”

Allen was known as a commentator who was willing to shine the light in the darkest corners of social injustice, with no deserving persons escaping its illumination.

And so, in January 2014, about four months after Thomas became a senator for the ruling Unity Labour Party (ULP), Allen criticised Thomas for threatening to sue a caller to a radio programme who had made certain comments about him.

“We have monitored, to some extent, his output in Parliament and it has been true to the principles of the PMC. There was a blip — if I might express a personal opinion– when he trod the path of suemanship — suing people. We consider that a blip, from which he has withdrawn. But we expect his performance to continually enlighten and enrich the work of the parliament,” Allen said of Thomas.

Asked why he considered “a blip” the decision by Thomas, a lawyer, to sue, Allen said:

“Suemanship is almost entirely a Ralph Gonsalves activity in the past years — an activity which I personally do not consider statesmanlike. For Mr. Thomas — and I think this is probably his first suing of people who were critical of him – [to sue,] I think it was a blip, therefore,” Allen said, noting that it is his personal view.”

Thomas did not follow through with his threat to sue the caller.

Allen is a graduate of the St. Vincent Grammar School, where he was a contemporary of Ralph Gonsalves, who would become Prime Minister of St. Vincent and the Grenadines in March 2001.

A close friend of his told iWitness News that the story is that Allen had visited Haiti while studying theology and was so moved by “the abject conditions there that it might have stirred in him to fight for social justice”.

Allen was a member of ARWE a group in his community of Diamonds. ARWE is said to have had clear political leaning and was “clearly leftist — having progressive ideas and thoughts”.

He is described as having been “well read” and influenced by the likes of Amílcar Cabral, a Bissau-Guinean and Cape Verdean agricultural engineer, intellectual, poet, theoretician, revolutionary, political organizer, nationalist and diplomat.

Cabral was one of Africa’s foremost anti-colonial leaders led the nationalist movement of Guinea-Bissau and Cape Verde Islands and the ensuing war of independence in Guinea-Bissau.

Another influential person in Allen’s life was Walter Rodney, a prominent Guyanese historian, political activist and scholar, who was assassinated in Guyana in 1980.

Allen was instrumental in the establishment of the Walter Rodney Resource Centre in Diamonds.

Allen was always close to politics and in 1979, he worked very closely with the then Gonsalves-led United People’s Movement.

However, by 2010, about a decade after Gonsalves’ Unity Labour Party (ULP) had come to office, Allen “had come to the decided opinion the ULP had lost its way and he wrote in way that suggested the he would have liked the ULP to lose,” Thomas told iWitness News.

In January 2014, in the aftermath of the Christmas 2013 floods, the PMC emerged from 18 months of dormancy and criticised the Gonsalves administration for its handling of the disaster relief.

The PMC said a  bi-partisan agency should overlook the reconstruction after the Christmas floods, adding that it fears a repeat of 2010, where some persons affected by Hurricane Tomas were yet to receive help, while persons not affected have received disaster relief.

“Our recent history over the past 30 years has shown us that when events like this happen, the resulting relief and rehabilitation is skewed, unjust, and inequitable,” Allen said.

And in February 2016, amidst political tensions in the aftermath of the Dec. 9, 2015 general elections — the results of which are still being contested in court — the PMC head said the “loss of unifying authority and morale” in the country is “the surface” of what is said is “a crisis” in the nation.

“Our country is unsettled, anger fills the airwaves and economic life is uncertain,” Allen said in the statement, adding that this is the candid observation of the PMC.

He said that when, after the elections, the second most popular political party cries foul and rejects the elected government, there is reason for unease.

“When this moment of tensions which should be met with a government’s restraint, vigilance, statecraft and self-analysis, meets instead with hostile denunciation and ridicule, the art and science of politics and governance descend to ‘What I say goes,’ a disrespect for diversity of opinion,” Allen said.

Allen was again critical of the ULP administration after the opening of the Argyle International Airport on Feb. 14, 2017 — seven years behind schedule and almost 100 per cent over budget.

In an article in Searchlight newspaper, to which he was a contributor, Allen said: “The abuse from the AIA project include: injustice to homeowners, contempt of opposition parties, breach of the nation’s unity, avoidance of financial accounting to people and Parliament, unacknowledged technical shoddiness and party balkanization/misappropriation of the society’s project. While the project was ongoing, the project leaders hurled invective, insult and vituperation at innocent enquirers, appropriate criticism, critical opponents and patriotic persons concerned for unity. It was as if all mouths must be sealed and all tongues chained unless they were singing praises. It was strange too, to hear over and over again, even at the launch, that the international airport was entirely built with resources from outside SVG, as if we, the citizens, did not bear any burdens!”

Thomas, who has been close to Allen since 1975, told iWitness News that Allen’s passing is “a big loss”.

“He was a very deep thinker. He had a way with words. [The Vincentian columnist] Kenneth John is celebrated as the man of letters because he has been writing for year. But I think Oscar used the English language better.

“He is a good man to emulate; a very simple man, humble, soft-spoken, but very profound,” Thomas told iWitness News.

In a Facebook post, Cordel Jacobs spoke of seeing Allen on Friday “in high spirits”, adding that he had inquired about how plans for Emancipation celebrations were coming along and who were the speakers for the night.

“He asked about the midnight march around the village… Is this really true our village icon has gone to a place of rest? He was a great historian everyone looks up to him in the village.”

Brereton Horne, a Vincentian lawyer based in Britain who was once a candidate for the main opposition New Democratic Party in St. Vincent, said Allen was “an educator, he was a true leader, he was a friend”.

And, Minister of Agriculture, Saboto Caesar described Allen as “The Greatest Community Man of all times!!”

“July 31st, Emancipation Rally Night, we will continue under the theme you gave us ………..you rest while we continue the struggle!” Caesar said in a Facebook post.