Man charged in connection with shooting 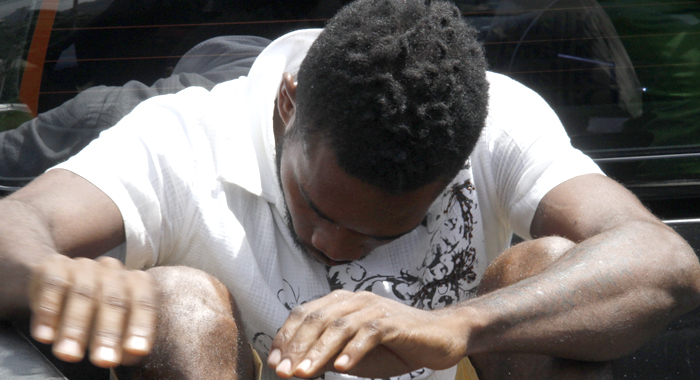 The accused, Mikhail Laidlow, holds down his head so as to avoid being photographed. (iWN photo)

A man has been remanded into custody for one week for bail review in connection with the July 16 shooting of another man.

Mikhail Laidlow appeared before Magistrate Bertie Pompey at the Kingstown Magistrate’s Court on Friday, charged that he unlawfully and maliciously wounded Eric De Freitas of Kingstown Park on July 16.

Prosecutor Station Sergeant of Police Elgin Richards objected to bail, telling the court that De Freitas was still in the hospital and had undergone surgery.

He asked that Laidlow be remanded into custody for seven days in the first instance, telling the court, “We have to play it by caution at this time.”

The prosecutor further told the court that De Freitas has expressed fear of the accused man.

But defence counsel, Patricia Marks-Minors told the court that De Freitas’ injury is not life threatening and that conditions can be put in place to ensure that the accused man has no contact with the virtual complainant.

She further said that since De Freitas is still in hospital, it is highly unlikely that there would be any interaction between him and the accused.

But Richards pointed out to the court that the arraignment is not a trial, adding that he does not want to go into the details of the injury that De Freitas suffered.

De Freitas was shot in his left thigh.

Richards further told the court that the weapon used during the commission of the offence hasn’t been recovered and reiterated that the virtual complainant is expressing fear of the accused.

He said these were enough grounds for the accused man to be denied bail.

Pompey adjourned the matter to Aug. 7, 2017 and transferred it to the Serious Offences Court in Kingstown, where bail will be considered again.

2 replies on “Man charged in connection with shooting”